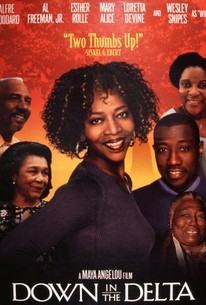 Down in the Delta Photos

Poet Maya Angelou made her feature directorial debut with this African-American family drama, shown theatrically but originally produced for the Showtime cable network. Unemployed single mother Loretta (Alfre Woodward) lives with her mother, Rosa Lynn (Mary Alice), in a Chicago apartment. Drugs and alcohol lead Loretta to neglect her autistic daughter, Tracy (Kulani Hassen). Her teen son Thomas (Mpho Koaho) brings in money by photographing tourists. Rosa Lynn pawns a family heirloom in order to send Loretta and the kids off to their Mississippi Delta hometown where Loretta's Uncle Earl (Al Freeman Jr.) runs his diner. Earl lives in a dry county, so Loretta is reluctant. However, she has no choice after Rosa Lynn threatens to contact child-welfare authorities if she doesn't go. Earl takes in the trio even though he already has enough problems with Annie (Esther Rolle), an Alzheimer's victim under the supervision of caregiver Zenia (Loretta Devine). Toronto locations substitute for Mississippi. Shown at the 1998 Toronto Film Festival.

Wesley Snipes
as Will Sinclair

Jeff Jones
as Man in Congregation

Bernard Browne
as Diner No. 1

Alison Sealy-Smith
as Diner No. 2

Eugene Clark
as Citizen No. 1

Chris Benson
as Citizen No. 2

Clinton Green
as Soloist in Church
View All

News & Interviews for Down in the Delta

View All Down in the Delta News

Critic Reviews for Down in the Delta

Year after year in film after film I've seen Alfre Woodard at work. She is on that very short list of people who rarely seem to appear in anything unworthy.

Down in the Delta is worth seeing for Woodard's performance.

Not particularly groundbreaking, and neither is its message, but it's all done with sensitivity and intelligence by Angelou.

I was not thrilled about having to see it. But, sitting there in the dark, I became tremendously moved by the movie, and I have not forgotten its power.

Employs too many redundant, stagy flashbacks to tell the story of Loretta's ancestors.

Shows that every family has a potential for resiliency and growth, no matter what the problems.

Audience Reviews for Down in the Delta

There are no featured audience reviews yet. Click the link below to see what others say about Down in the Delta!

Down in the Delta Quotes