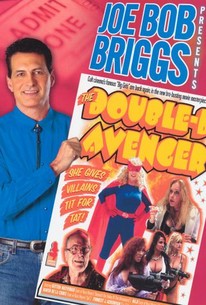 A superheroine who proves the old adage that "it's what up front that counts" takes on bad guys and gals in this over-the-top comedy. Chastity Knott (Kitten Natividad) is the owner of a saloon which had been taking a lot of business away from a nearby watering hole run by cranky Al Purplewood (Larry Butler). Purplewood is trying to find a way to drive Knott out of business, but she has problems of her own to deal with when she learns she has breast cancer (no small problem for her). Knott is told that the rare Crockozilla plant has remarkable healing powers and to her surprise it not only cures her cancer, it gives her super powers. Just in time, too, because Purplewood has told the strippers who work at his joint to wipe out Knott once and for all. Transforming herself into the Double-D Avenger, Knott takes on the heavily armed band of exotic dancers (among them Haji, Raven De La Croix, and Sherri Dawn Thomas) and tries to restore order to her community. The Double-D Avenger also features Famous Monsters of Filmland editor Forrest J. Ackerman in a supporting role as a caretaker at a museum.

Ray Verduzco
as Ronaldo the Guide

Critic Reviews for The Double-D Avenger

Not since "Beach House" have I been so moved.

There are no featured reviews for The Double-D Avenger at this time.