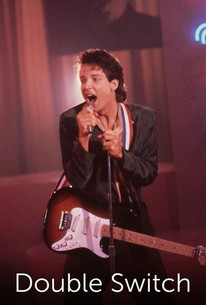 Disney's Double Switch stars George Newbern and....George Newbern. The plot revolves around a teenaged rock idol named Bartholomew (Newbern #1). Trapped by his celebrity, Bartholomew finds a way out when he meets the geeky winner of a Bartholomew lookalike contest (Newbern #2). In the tradition of The Prince and the Pauper, the two teens trade places, then refuse to go back to their true identities because they're having too much fun. A very young Elizabeth Shue costars as the "other" Bartholomew's girlfriend. Double Switch originated as the January 4, 1987 episode of TV's Disney Sunday Movie.

There are no critic reviews yet for Double Switch (Switching Places). Keep checking Rotten Tomatoes for updates!

There are no featured reviews for Double Switch (Switching Places) at this time.