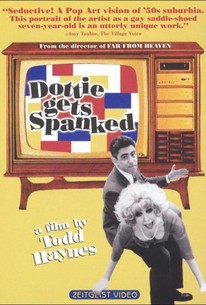 A young boy becomes enamored with a Lucille Ball-like television star -- much to the chagrin of his conservative, 1950s suburban parents -- in this short film from Far From Heaven director Todd Haynes. Though six-year-old Steven Gale (J. Evan Bonifant) loves nothing more than to watch his favorite television starlet, Dottie Frank (Julie Halston), on the "The Dottie Frank Show," the small-screen comedy is generally considered to be for girls, and his parents begin to ponder his sexuality. When Steven wins a contest to visit Dottie on the set, the young fan is suddenly prompted to look deep within himself to realize who he really is.

Critic Reviews for Dottie Gets Spanked

There are no critic reviews yet for Dottie Gets Spanked. Keep checking Rotten Tomatoes for updates!

Audience Reviews for Dottie Gets Spanked

The trials and tribulations of a so-called Femanino. This short film brings you to a place in childhood that deals with shame, embarrassment and curiosity related to interests one may have that is unlike the others.