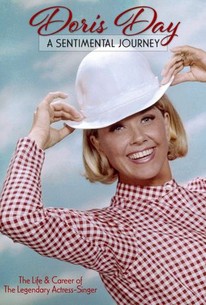 DORIS DAY: A SENTIMENTAL JOURNEY is a celebration of one of Hollywood's biggest and most beloved stars. Doris Day began her legendary career as a big band singer in the 1940s, made her motion picture debut in 1948 and became box-office magic for the next two decades in musicals, comedies and dramas such as Calamity Jane, The Man Who Knew Too Much, The Pajama Game, Please Don't Eat the Daisies, The Thrill of It All and three iconic romantic comedies with Rock Hudson, including her Oscar-nominated Pillow Talk. In the late 1960s, Doris moved to television with her top 10 self-titled sitcom followed by music specials in the 1970s and "Doris Day's Best Friends" in the 1980s. Since retiring from show business, Day has devoted herself to her first love with the Doris Day Animal Foundation. DORIS DAY: A SENTIMENTAL JOURNEY details her dramatic life story and career, guided by Doris along with famous friends (Betty White, Clint Eastwood) and admirers (film critics Roger Ebert and Molly Haskell). Also featured is rare footage and archival materials from the star's own collection.

There are no critic reviews yet for Doris Day: A Sentimental Journey. Keep checking Rotten Tomatoes for updates!

There are no featured audience reviews yet. Click the link below to see what others say about Doris Day: A Sentimental Journey!