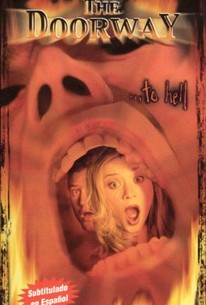 This silly but absorbing horror film from executive producer Roger Corman's New Concorde studio concerns four college students who accept an offer of ten thousand dollars to fix up an old house. What they don't know is that the house was owned by a cult of devil worshippers in the 17th century and that there is a gateway to Hell in the basement. Before long, severed hands are caressing the naked Susan (Suzanne Bridgham) in the shower, her boyfriend Rick (Christian Harmony) is possessed and has sex with their friend Tammy (Lauren Woodland), and goofy Owen (Don Maloney) is menaced by what appears to be a clawed ghost. It's actually Evelyn Van Buren (Teresa De Priest), a demon in human form who slept with the house's original owner, corrupting his soul and leading him to take part in vile Satanic orgies before the whole place was burned to the ground and the current home built on top of the remains. The kids bring in Professor Lamont (Roy Scheider), who reluctantly agrees to investigate and ends up getting his face gorily ripped off his skull by the vengeful Evelyn, whose direct descendant Lydia, a clairvoyant, must help the terrified students battle her ancestor before they all get sucked down to Hell. Writer/director Michael B. Druxman throws in elements of everything from The Haunting to Night of the Demons, but his primary influence seems to be the Italian cult classic L'Aldila.

John Cullen
as Demon
View All

Critic Reviews for The Doorway

There's finally some good gore towards the end, but this is after a long first hour which contains little more than a weird lady-ghost that keeps hitting on everyone.

Audience Reviews for The Doorway

There are no featured audience reviews yet. Click the link below to see what others say about The Doorway!