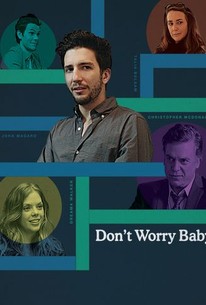 A down-on-his-luck photographer (John Magaro) and his womanizing dad (Christopher McDonald) both sleep with the same woman (Dreama Walker). Four years later, they take a paternity test to determine which one is the father of her young daughter. Tom Lipinski and Talia Balsam co-star. Written and directed by Julian Branciforte.

Will Brill
as Jack

Cruz Rodriguez
as Kid in Classroom

Despite an implausible ending devoid of consequence, "Don't Worry Baby" benefits from tidy editing, cinematography and, most of all, the presence of the seasoned Mr. McDonald and Ms. Balsam.

Unsurprisingly, the film doesn't live up to its Beach Boys-quoting title. Things turn out all right, but there's little real emotional force.

Don't Worry Baby is more than just a father-son comedy, it's an emotional roller coaster, too.

Father and son boff the same babe-and a baby girl results. From this queasy premise, an onscreen abortion is wrought.

Even if it does shy away from harsher truths, Branciforte's inaugural feature is a joy to watch.

There are no featured audience reviews yet. Click the link below to see what others say about Don't Worry Baby!