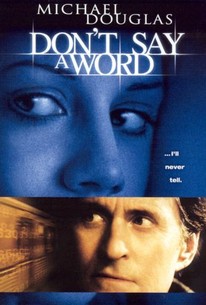 Critics Consensus: Don't Say A Word is slick and competently made, but the movie is routine and stretches believability with many eye rolling moments.

Critics Consensus: Don't Say A Word is slick and competently made, but the movie is routine and stretches believability with many eye rolling moments.

Critic Consensus: Don't Say A Word is slick and competently made, but the movie is routine and stretches believability with many eye rolling moments.

This psychological thriller from screenwriter Patrick Smith Kelly reunites him with his A Perfect Murder (1998) star Michael Douglas. Dr. Nathan Conrad (Douglas) is a respected adolescent therapist faced with a nightmarish scenario when his young daughter (Skye McCole Bartusiak) is snatched by Koster (Sean Bean), a criminal with a talent for high-tech surveillance. Conrad learns that the kidnapper is desperate for a critical piece of information known only to Elisabeth Burrows (Brittany Murphy), one of his catatonic pro bono patients. While his wife Aggie (Famke Janssen) remains at home, bedridden due to a broken leg, Conrad races to unlock the secret stored in Elisabeth's fractured mind, while a New York City detective (Jennifer Esposito) inches closer to discovering the Conrads' dilemma. Don't Say a Word co-stars Oliver Platt and Guy Torry and is directed by Gary Fleder, who follows up his suspense smash Kiss the Girls (1997). ~ Karl Williams, Rovi

Ray Iannicelli
as Man at Marina

Colm Magner
as Cop No. 1

Cyrus Farmer
as Officer No. 1

Patricia Mauceri
as Sofia
View All

"Casino Royale" Test Screening is Fantastic
Critical Consensus: A Weak "Sentinel," So-So "Dreamz" Are Made Of This, "Silent Hill" Not Screened

A smart script and great casting elevate a pedestrian premise to the status of satisfying thriller.

In the place of consistent psychological tension, we are saddled with shoot-outs, chases, and fight scenes.

As an odyssey of paternal qualm, Fleder's forgettable thriller has a convincing edge, and Douglas remains unchallenged as Hollywood's most tremulous and disquieting dad-under-pressure.

A well-crafted thriller that breaks no new ground but is an exciting diversion with plausible twists of logic and an exciting climax.

A big, noisy mess, with a howler at its center.

It's a Hollywood movie, not a good movie.

As generic as the title suggests, this routine psychological thriller about a yuppie shrink whose daughter is kidnapped can't be saved by Michael Douglas's screen presence.

This could have been a pretty tight little thriller if it weren't for the gaping, bleeding plot bulletholes.

Rarely rises above the status of conventional thriller.

Fleder can only fling the camera about and indulge in some familiar screen sadism ... as he tries to squeeze a few thrills from material as desiccated as his leading man.

Renowned psychiatrist Nathan Conrad visits an 18 year old woman who is mentally disturbed with his colleague Dr Sachs. The next morning he awakes to find his daughter kidnapped and him and his wife under surveillance by a shadowy group of men. He is given until 5pm that day to get the patient to reveal a 6 digit number to him that is locked up in her head. Meanwhile his wife is trapped in their flat and police woman Cassidy is piecing together a puzzle that begins with the discovery of two related murders. It doesn't matter how daft a story is if it manages to convince you for as long as it's on screen. For example Face/Off has the most absurd plot in the world, but for 2 hours it doesn't matter and it carries you along. This doesn't quite manage the same trick. The plot is daft - every single part of it is silly from the idea of a girl being unreachable is daft, the idea of the gang doing this is daft and the way that with very little notice the gang manage to set up cameras everywhere. That said it has it's moments - the opening robbery is good and some of the drama works well. However for too much of the film you feel like the director is really trying to make it feel more tense than it is - witness the scene where Conrad first finds talks to Patrick Koster on the phone, the camera spins wildly all round him. Similarly he uses a lot of handheld stuff to give the impression of more action than is really happening, he also uses other lazy tricks like having everyone shouting their lines at times and making everyone squeal their tyres etc when they drive! These combined with the silly plot make it hard to get into. Douglas is OK but he doesn't convince as the strong father figure that saves the day - he looks too old to take on Bean in a fight. He also looks far to old to have a beauty like Famke Janssen. She does well despite being stuck indoors all the time - the only problem with her is that she is far to warm and perfect a character. Murphy is good although she has moments where she's too hammy. Bean and his gang are good but they are distant from the action and never feel like a real threat - in fact you could almost sympathise with Bean, having been double-crossed at the start and wasting 10 years of his life. Esposito is OK but she doesn't really have a character - she tries to be tough and slightly sassy (a role she did so well everyday in Spin City) but she comes across as nondescript as her black leather coat. Victor Argo is a pleasure to see, but he's wasted here with nothing to do in a really small role. Fans of Abel Ferrera will know him while he's been in other things (notably the two Smoke films) and know how good a character actor he can be. Overall this never manages to rise above it's silly plot. It has it's moments but with lesser stars this would have been just another silly straight-to-video thriller.

Excellent thriller about a kidnapped girl and how Michael Douglas a psychiatrist gets information from Brittany Murphy a tramatized patient to solve the case.

A fantastic performance by Brittany Murphy makes this story so great. My favourite performance of hers to date. Original story, covering a heist, a mental institution and a kidnap VERDICT: Definitely recommend.