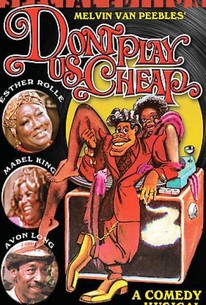 Melvin Van Peebles' first film after his groundbreaking blaxploitation effort Sweet Sweetback's Baadasssss Song was this photographed version of his Broadway musical +Don't Play Us Cheap, in which a pair of Satan's helpers, in order to earn their horns, are dispatched to Harlem to crash into (and break up) a wild party. Don't Play Us Cheap received only a minimal release in 1973, and was largely unseen until it was released on videotape in the mid-'90s.

There are no critic reviews yet for Don't Play Us Cheap. Keep checking Rotten Tomatoes for updates!

There are no featured reviews for Don't Play Us Cheap at this time.