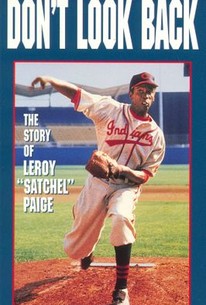 This TV-movie biography of legendary black ballplayer Leroy "Satchel" Paige unfortunately whitewashes and hokes up his fascinating story. Louis Gossett Jr. stars as Paige, who spends virtually his entire professional career in the Negro leagues because of the "gentlemen's agreement" barring African-Americans from the Majors. Paige's prowess as a pitcher is so famous that he becomes the highest-paid player in the Negro leagues -- but as for joining the mainstream teams, the answer is always the same: "If only you were white." When Jackie Robinson is signed by the Dodgers in 1946, the doors open for other black ballplayers; thus it is that in 1948, Satchel Paige becomes the first black pitcher in the American leagues...at the tender age of 42. Don't Look Back down-pedals Satchel Paige's tempestuous private life (his two marriages are combined into one, for example), and tends to shortchange the viewer in the crucial ball-playing scenes. Its saving grace is the towering performance by star Louis Gossett Jr., who struggles manfully to overcome the script's shortcomings. When the film was first telecast on May 31, 1981, the real Satchel Paige appeared in the prologue; one year later, Paige was dead at the (reported) age of 76.

Critic Reviews for Don't Look Back: The Story of Leroy 'Satchel' Paige

There are no critic reviews yet for Don't Look Back: The Story of Leroy 'Satchel' Paige. Keep checking Rotten Tomatoes for updates!

There are no featured reviews for Don't Look Back: The Story of Leroy 'Satchel' Paige at this time.

Don't Look Back: The Story of Leroy 'Satchel' Paige Quotes