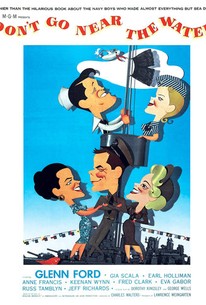 Don't Go Near the Water Photos

Obviously inspired by such service comedies as Mister Roberts and Operation Mad Ball, Don't Go Near the Water is a tribute to those "unsung heroes" of WW2: the men and women of the Navy's Public Relations Department. Thousands of miles away from the shooting war, Lt. Max Siegel (Glenn Ford) and the rest of the PR staff spend their time issuing colorful reports of Naval heroism and sucking up to visiting US dignitaries on a tiny South Sea island. Siegel and company also battle the anal-rententive pettiness of such superior officers as Lt. Cmdr. Clinton T. Nash (Fred Clark) and such potential foes as abrasive war correspondent Gordon Ripwell (Keenan Wynn). The feminine angle is provided by Gia Scala as Melora, a European-educated local girl, Anne Francis as by-the-book nurse Lt. Alice Tomlen, and Eva Gabor as women's magazine writer Deborah Aldrich. Particularly amusing is Mickey Shaughnessy as foul-mouthed seaman Farragut Jones, whose periodic barrages of profanity are invariably drowned out by the sound of a ratchet-horn (this was, after all, 1957). Don't Go Near the Water was based on the comic novel by ex-PR man William Brinkley.

Howard I. Smith
as Adm. Boatwright

Critic Reviews for Don't Go Near the Water

There are no critic reviews yet for Don't Go Near the Water. Keep checking Rotten Tomatoes for updates!

There are no featured reviews for Don't Go Near the Water at this time.

Don't Go Near the Water Quotes