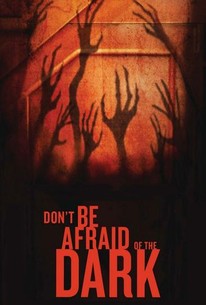 Critics Consensus: While it's pleasantly atmospheric and initially quite scary, Don't Be Afraid of the Dark ultimately fails to deliver the skin-crawling chills of the original.

Critics Consensus: While it's pleasantly atmospheric and initially quite scary, Don't Be Afraid of the Dark ultimately fails to deliver the skin-crawling chills of the original.

Critic Consensus: While it's pleasantly atmospheric and initially quite scary, Don't Be Afraid of the Dark ultimately fails to deliver the skin-crawling chills of the original.

Don't Be Afraid Of The Dark Photos

While architect Alex Hurst (Guy Pearce) and his new girlfriend Kim (Katie Holmes) restore their Gothic mansion's period interiors, Alex's young daughter Sally (Bailee Madison) can investigate the macabre history and dark corners of the estate. Spurring Sally's investigation are the voices-rasping whispers who call out to her from the basement, who promise her understanding and friendship, who are so very hungry and would like to be set free. When Sally gives in to her curiosity, she opens a gateway into a hellish underworld from which an army of beady-eyed, sharp-clawed monsters emerge, small in size but endless in number. Confronted with the horror that now threatens to taker her life and destroy her family, Sally desperately tries to warn the whole house, but there's just one problem: no one believes her. -- (C) Miramax

Abbe Holmes
as Joanne
View All

News & Interviews for Don't Be Afraid Of The Dark

View All Don't Be Afraid Of The Dark News

Critic Reviews for Don't Be Afraid Of The Dark

Don't Be Afraid of the Dark is horror by-the-numbers. Parts of it are effectively chilling, and the performances are fine, but there's no sense of reality.

Decently produced and acted, and the demons are creepy - but this is no Pan's Labyrinth and ends up a mite predictable.

Del Toro's influence is apparent in the CGI of the bulbous-headed goblins, but the story has none of the shiver-inducing otherness of Pan's Labyrinth.

A minor Del Toro, perhaps, but a must for his fans.

All told, it's about as scary as The Tigger Movie.

There is so much here that one admires, one wishes that there was more to love.

As for the film's payoff? Bone chilling terror. Be afraid. Be very afraid.

Don't Be Afraid of the Dark works well as a whole, and should leave you satisfyingly unable to comply to its titular injunction: best viewed with the lights off.

Don't Be Afraid Of The Dark is fun and creepy in an old-fashioned Hammer way, but it never makes us truly afraid.

"Don't Be Afraid of the Dark" has the distinction of mixing some old-fashioned spine-tingling scares in with a decidedly new spine to be tingled.

There are dumb movies, and then there are Dumb Movies, movies that seem so brain-dead that they don't even bring a number 2 pencil to the exam. This is one of those movies.

Johnny Gayzmonic
Fanboys of the Universe
View All Critic Reviews (173)

Audience Reviews for Don't Be Afraid Of The Dark

Hey, I'm a fan of the 1973 original; it was the first real horror movie I saw and made me a horror fan for life. The remake producer Guillermo Del Toro was supposedly a fan too, but this movie was too manufactured and lacked the rawness of the original. The remake's large gothic house was overdressed and overstyled. One of the biggest changes from the orignial was that the family in the house now had a little girl - and she was the one pestered by the little goblin things which came out of the caverns under the fireplace in the basement. They created a huge legend of these creatures, with a historical sorta prologue of the previous owners. Added to the legend was the creatures' need for human teeth! All this story clutter made the story less immersive and less scary. I liked the CGI appearances of the creature hoard. The scene with the Handyman meeting the creatures was painfully gorey. They remade some of the classic scenes with greater effects, but nothing in the whole movie was ever scary. The pay-off came at the end, which I really liked.

First of all, the rating is all wrong. I think 15 is more like it. There were times when the characters' actions were painfully stupid and I thought the ending was rubbish. Despite all that, I really enjoyed this one.

Creepy little demons. Scared little girl that no one will pay attention to. Lots, and lots of darkness...made me jump more than once, so that means something in my book. Not the greatest of endings, as usual..

An ok atmospheric gothic tale, not really a horror film to be honest. It probably could have got a 12 rating. The house and little creatures make the film which has an eerie feel to it with the little whispered voices. Overall though it's a bit slow and not much happens, could have been better.

Don't Be Afraid Of The Dark Quotes