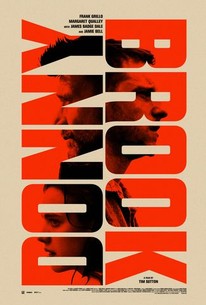 Critics Consensus: Donnybrook has a solid cast and noble intentions, but they're overwhelmed by surface storytelling and unrelentingly grim violence.

Critics Consensus: Donnybrook has a solid cast and noble intentions, but they're overwhelmed by surface storytelling and unrelentingly grim violence.

Critic Consensus: Donnybrook has a solid cast and noble intentions, but they're overwhelmed by surface storytelling and unrelentingly grim violence.

Three desperate souls must fight their way out of a dead-end world in this bracing, gut-punching glimpse into America's dark underbelly. Earl (Jamie Bell) is a struggling ex-marine and father determined to make a better life for his family--no matter what it takes. Angus (Frank Grillo) is a violent, unhinged drug dealer who leaves a trail of death and destruction in his wake. And Delia (Margaret Qualley) is a haunted woman who will do anything to escape a life of crime she can no longer bear. In their kill-or-be-killed world, all roads lead to the Donnybrook: an illicit backwoods cage match where bare-knuckled fighters brawl for a shot at a $100,000 prize. It's either a last-ditch chance at redemption--or a death sentence. Blending unflinching brutality with dreamlike lyricism, director Tim Sutton conjures a mesmerizing, visceral vision of life on the extreme margins.

Alita: Battle Angel Is Style over Substance… but the Style Is Killer

There are no winners here, only losers.

I like my sleaze 100% pure; this movie is covered in Sleaze-Whiz.

Tim Sutton's artfully directed but self-important downer of a movie that's meant to be some sort of Grand Statement about life among dispossessed whites in rural, Midwestern America.

Anchored by a quartet of fierce performances, "Donnybrook" is an intense, visceral tone poem, a rumination on money and drugs and bloodshed as a means of making ends meet in the heartland of modern America.

"Donnybrook" is a movie about, among other things, bare-knuckle fighting, but it's the viewers who will feel beaten down.

A pointless exercise in gratuitous violence that imagines itself deep because it's got an opera-heavy score.

The gritty film is a no-holds-barred bare-knuckle battle royal through the most impoverished corner of contemporary America. It is not for the faint of heart.

A repulsive story of drugs and street-fighting that wallows in violence more than suspense.

Donnybrook has trouble finding its footing, coming off as derivative of superior films.

The rural and sometimes riveting thriller implodes as predictability takes over. It resembles a film that would have been released by Golan-Globus under Cannon Films in the late 80s/early 90s.

Rough and tumble violence in an uncaring world.

Unapologetically harsh with an abundance of visceral mayhem.

There are no featured audience reviews yet. Click the link below to see what others say about Donnybrook!