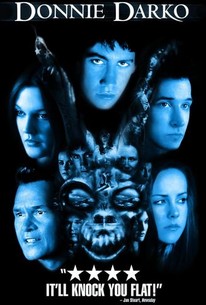 Donnie (Jake Gyllenhaal) is a bright and charming high-school student who also has a dark and willfully eccentric side; he does little to mask his contempt for many of his peers and enjoys challenging the authority of the adults around him. Donnie is also visited on occasion by Frank, a monstrous six-foot rabbit that only Donnie can see who often urges him to perform dangerous and destructive pranks. Late one night, Frank leads Donnie out of his home to inform him that the world will come to an end in less than a month; moments later, the engine of a jet aircraft comes crashing through the ceiling of Donnie's room, making him think there might be something to Frank's prophesies after all. The rest of Donnie's world is only marginally less bizarre, as he finds himself dealing with his confused parents (Mary McDonnell and Holmes Osborne), his college-age sister (Maggie Gyllenhaal), his perplexed analyst (Katherine Ross), a rebellious English teacher (Drew Barrymore), a sleazy self-help expert (Patrick Swayze), and the new girl at school who is attracted by Donnie's quirks (Jena Malone). Donnie Darko was the first feature film from writer and director Richard Kelly; Drew Barrymore, who plays teacher Karen Pomeroy, also lent her support to the project as executive producer. A director's cut played in select theaters on a limited basis in the summer of 2004, featuring original music cues and trimmed scenes originally in Kelly's first cut of the film. ~ Mark Deming, Rovi

Scotty Leavenworth
as David
View All

Kelly is a supple and courageous storyteller, boldly free-associating as he mixes parody and satire with earnest psychodrama and coming up with plot points no one could anticipate.

Donnie Darko has plenty of problems. But most stem from a young filmmaker overswinging on his first time up to the plate and hitting a deep fly out rather than a home run.

A stunning technical accomplishment that virtually bursts with noise, ideas and references.

First-time director-writer Richard Kelly draws on a number of intriguing elements ... without including a single, crucial gem that pulls everything together.

If this movie ever figured out what it wanted to be when it grows up, it would be a terrific one.

It's a dense, complicated and amazing amalgam of genres and influences that really defies any constraints.

I certainly didn't have an emotional bond with the film. Still, I admire the risk taking and what it has to say about mental illness.

It's ultimately the piece's surprisingly sincere, compassionate edge which transmits the most.

[Richard] Kelly winds so many ideas, so many questions, and so much marvelously strange experience through this ambitious film that you can forgive the few loose ends and overdone caricatures amidst the richness.

The theatrical version is some kind of compacted masterpiece, hormonal, vital, dazed, blissfully unhinged... I'm too attached to Donnie Darko to worry over its wanton weirdness, its mix of concreteness and intangibility.

It remains an aesthetically filmed blend of off-beat comedy, mind-boggling sci-fi, and subjective storytelling that serves as a singular and timeless piece of cinema.

A smart high schooler realizes 1) that his schmarts sets him forever apart from mainstream society, 2) a society which ain't all that much to begin with and more, which hates him for his schmarts, and so 3) he concocts a plan to do something about it. A stunning debut for writer/director Richard Kelly, a poetic and apt critique of society (if obvious), as well as decent filmmaking to boot. What more do you want?

Incredible movie, completely underrated. Donnie Darko is the most unlikely hero of the small town of Middlesex in this amazing, original film. It may require more than one viewing to understand it. I highly recommend watching the director's cut.

I'm not sure what I'm supposed to come away from Donnie Darko with, I would say that this is a very clever film, or a very clueless one. ( I Think) When it begins everything that follows for the next hundred minutes has happened already. That's one way to look at it. Another way would be to see it as pure surrealism like John Carpenter's In The Mouth of Madness or David Lynch's Mullholland Dr. Such films are conundrums, but the question is whether or not you are capable of watching a movie that leaves you frustrated intentionally. If surrealism is your thing, you will probably have luck with Donnie Darko. It is a good one for a movie goer. Up until the climax, we are led to believe that this is a film about a young suburban middle- class boy (Donnie) who has schizophrenia and one night envisions a large satanic looking rabbit (the anti-Harvey) to tells him to do some pretty bad things if he wants to survive the end of the world in 28 days, something hours and something seconds. The people in this film are weird, though not as much so as Mulholland Dr. (In part because the acting here is more toned down, usually) One could argue though that there are too many characters. Some of the screen time that is dedicated to the supporting cast could have gone to Donnies story, which is more important. His conversations with Frank (the rabbit) are intriguing but they are too short and too few. The climax is one that takes Donnie Darko and turns it inside out. There is no literal resolution to the thriller side of Donnie Darko, only what the viewer chooses to make of it. Is it a great movie? no, but its partial originality and evocative direction are enough to make it worth a watch. 1/2 Star 1-15-2004 (Updated)

A wickedly smart, savvy supernatural thriller from the mind of one-hit wonderkid Richard Kelly about a mentally disturbed boy (Jake Gyllenhaal) who is harassed by a demonic bunny rabbit who says the end of the world is coming in 28 days. This has been heralded by many as a phenomenal film, attaining a cult following over the years, and it lives up to its reputation with a plot designed by an absolute genius of a writer and director in Kelly. Gyllenhaal's perfect performance is the major driving force behind this film, being that his character is brutally honest in addition to being severely troubled and confused, which makes him a character that is easy to empathize with. The end of the film is a head-scratcher to be sure, but once you figure out all the nitty, gritty details, it is hard not to be in awe of how creative it is. Probably one of my favorite films to watch again and gain, it is hard not to love its subversive take on 80's culture and the basic family structure in addition to its insane, ultimately brilliant storyline.