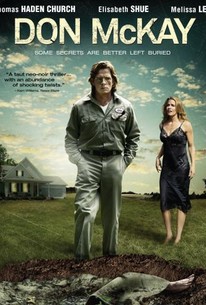 Critics Consensus: Thomas Haden Church and Elisabeth Shue do their best with what they're given, but Don McKay is too confused and far-fetched to be taken seriously as a noir, and too inconsistent to work as a black comedy.

Critics Consensus: Thomas Haden Church and Elisabeth Shue do their best with what they're given, but Don McKay is too confused and far-fetched to be taken seriously as a noir, and too inconsistent to work as a black comedy.

Critic Consensus: Thomas Haden Church and Elisabeth Shue do their best with what they're given, but Don McKay is too confused and far-fetched to be taken seriously as a noir, and too inconsistent to work as a black comedy.

First time writer/director Jake Goldberger takes the helm for this thriller about a man who returns to his hometown after receiving a letter from his high school sweetheart, who claims to be dying. It's been 25 years since Don McKay (Thomas Haden Church) turned his back on his hometown, and he never imagined he would ever return. But when a letter from his former girlfriend Sonny (Elisabeth Shue) appears in Don's mailbox, he can't resist visiting his old flame one more time, before her light disappears forever. When Don comes home and realizes that his memories of Sonny don't match up with the woman she is now, it quickly becomes apparent that he harbors a shameful secret from years gone by. Meanwhile, Sonny's doctor (James Rebhorn) and caretaker (Melissa Leo) don't warm quickly to the returning visitor, and a chance run-in suddenly compounds Don's buried secret. ~ Jason Buchanan, Rovi

Critics Consensus: Titans Is Not A Kraken Good Time

Goldberger gets a few good tonal feints in, especially when he consults the Coen recipe book for the disorienting effect of blood (and bloody violence) on American simple folk.

When you pack your movie with performers like Mr. Church, Ms. Leo, Mr. Rebhorn and Keith David (as Donâ(TM)s old friend), all with faces and deliveries that can slide easily between comedy and menace, youâ(TM)re holding a full house.

Don McKay certainly has its moments, but it never manages to maintain the consistent tone so crucial if a black comedy is going to actually be funny.

This is a movie that, if you can make it to the last 30 minutes, starts to make some sense. It seems the plot twist is the only good idea in the script.

An admirable attempt even if the film only works spottily.

...an almost aggressively pointless piece of work that simply isn't able to justify its very existence.

Labored and distractingly uneven, Don McKay comes across as a lackadaisical film school writing assignment that somehow lucked into a feature film deal.

Goldberger makes the most of his eclectic, multi-Oscar-nominated cast to make up for the lack of scope and visual panache, not to mention the sometimes strained machinations of his plot

The tone and the pacing always seem a little off and as a result, we become all too aware of mechanics of the screenplay grinding along towards a finale that is simply too complicated and unbelievable for its own good.

Clearly Goldberger thinks he can juggle this delicate noirish soufflé but it all comes crashing down around him because the true nature of his characters' actions just don't make a whole lot of sense.

[Director] Greenberg's tyro script is both dark comedy and slick whodunit and all the players do it justice. He handles his material and fine cast with a deft hand that belies his freshman status.

A lukewarm Lynch-like film that leaves much to be desired, especially from stiff-jointed actress Elisabeth Shue. The movie's a series of curve balls without any real dramatic tension. It also can't make up its mind tonally. One minute it's a serious thriller, the next a black comedy. It's very rough and with a little work it could have been a bit more interesting. It's just a mess of a movie that will only mildly entertain.

Thomas Hayden Church (as Don McKay) has been around for a loooong time, as an actor...I saw this and wasn't disappointed at all!!! What a twisting, dark and delirious movie of a man that kept a secret for years and saved it to the very end.See this...his secret will stun and move you.

Cast: Thomas Haden Church, Rachel Harker, Stephen Benson, M. Emmet Walsh, Melissa Leo, Elisabeth Shue, Amanda Donaghey, James Rebhorn, Keith David, Pruitt Taylor Vince, Lonnie Farmer Director: Jake Goldberger Summary: At the urging of his ex-girlfriend, Sonny (Elisabeth Shue), who has been diagnosed with terminal cancer, high school janitor Don McKay (Thomas Haden Church) returns to his hometown for the first time in 25 years and finds himself ensnared in a web of conspiracy, deception and murder. My Thoughts: "I really don't know how I feel about this film. It's not your typical thriller. It's pretty average to say the lease. The character's are odd and sometimes unbelievable in their parts. The acting was semi good. Elisabeth Shue's acting was between good and bad. I'm not sure if that was how her character was to be played, or if it was indeed her acting. Thomas Haden Church played an quiet, sad, but kinda interesting character. He just seemed very lonely, but by the ending of the film you understand why. The last 30-40 minutes of the film, in my opinion, is the only part worth watching. That's when you get interested in where it's going. Unfortunately you have to sit through the rest of it to understand the ending. But the ending and the twist is disappointing as well. Even unrealistic. There was some dry humor, but not much. The script left something to be desired. Not sure if many will like this film."

Its a thriller,comedy and indie role in to one.Thomas Haden Church is great as the main title role.Elisabeth Shue as never been better.The movie is a mix bag and was not sure what i was watching but was drawn into it with ease.Its was never boring and with the added little twist at the end which i never saw coming it is a great watch and worth checking out.