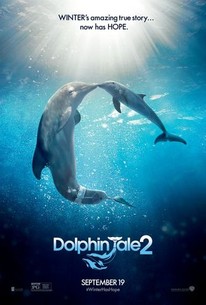 Critics Consensus: Much like its predecessor, Dolphin Tale 2 offers animal antics and sweet, old-fashioned drama that the whole family can enjoy.

Critics Consensus: Much like its predecessor, Dolphin Tale 2 offers animal antics and sweet, old-fashioned drama that the whole family can enjoy.

Critic Consensus: Much like its predecessor, Dolphin Tale 2 offers animal antics and sweet, old-fashioned drama that the whole family can enjoy.

Warner Bros. Pictures and Alcon Entertainment's "Dolphin Tale 2" continues the story of the brave dolphin Winter, whose miraculous rescue and recovery-thanks to a groundbreaking prosthetic tail-made her a symbol of hope and perseverance to people around the world and inspired the 2011 family hit movie "Dolphin Tale." The film reunites the entire main cast, led by Harry Connick, Jr., Oscar (R) winner Morgan Freeman ("Million Dollar Baby"), Ashley Judd, Kris Kristofferson, Nathan Gamble, Cozi Zuehlsdorff, Austin Stowell, and, of course, the remarkable dolphin Winter as herself. Charles Martin Smith, who directed "Dolphin Tale," wrote the sequel and is again at the helm. It has been several years since young Sawyer Nelson (Gamble) and the dedicated team at the Clearwater Marine Hospital, headed by Dr. Clay Haskett (Connick, Jr.), rescued Winter. With the help of Dr. Cameron McCarthy (Freeman), who developed a unique prosthetic tail for the injured dolphin, they were able to save her life. (C) Warner Bros

Jessica Fernandez
as Volunteer At Pairing

Jim Coleman
as Board Member Pat

Hope Hanafin
as Jeannette
View All

Mild fun ensues, but even the returning players can't divert us from all its narrative water-treading ...

This is innocuous, heart-in-the-right-place family fare, but its well-earned points about animal rights and preservation would be better taken if the relentless sentimentality didn't force viewers into flippers-in-the-air submission.

With its important lessons of opportunity and hope, the sequel makes for fine family entertainment.

Some angst away from the dolphin tank feels like padding, but there's enough bona fide narrative to please tomorrow's marine biologists and their parents.

In a world full of cheapened, bombastic entertainment aimed at children, this modest, honest little movie feels special in its own way.

It is made up of equal parts sentimentality and some very warm-hearted animal moments without really offering anything new.

"Dolphin Tale 2" is fine when it stays in the pool, but there is way too much time spent away from the dolphin.

The dialogue is cheesy and some of the moments are contrived, yet overall it is still a safe, enjoyable film that kids especially can enjoy without Mom and Dad covering their eyes from random violence every few minutes.

Featuring a few beautiful scenes that will probably warm the heart of the most hardened cynic, Dolphin Tale 2 makes for some wholesome family fare.

[Dolphin Tale 2] is a movie and a world where adults are evil, children are mighty, and justice is won with a hug.

A heartwarming sequel with Winter, everyone's favourite dolphin. Whilst the sequel is not as good as the original it still keeps you entertained.

Dolphin Tale 2 is a sweet, albeit slight family film. Well-meaning and cute, the actors are all spot on with the two younger kids not being overly cutesy. The film works as wholesome and charming family entertainment, even if the emotional impact isn't as great this time around. Rating: 64

While it may not have the emotional impact that the first film did, I really admire the fact that both films are based on the continuing true story of these people. These filmmakers really to feel like they care about this incredible story, but the big issue this film has is that it should have waited a little longer to be made, because it does not have enough material to fill it's running time. Yes, it has some very genuine moments, the cast is loveable and the animals are the main focus in the film once again, and yes those portions are all terrific, but there is something off the entire time, making it a little distant from what made the first one special. Again, it is still based on the true story, so there are no flaws in the film, but I just wish they had waited to explore more. "Dolphin Tale 2" is a very well-written film that is good for anyone of any age and I had a very good time watching it. It is a solid film that does not quite compare to it's predecessor but all the heart is still in the right place!