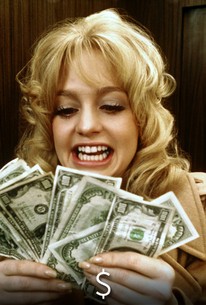 Originally billed as merely $, Dollars stars top box office draws Warren Beatty and Goldie Hawn. Beatty plays a security whiz, employed in Hamburg, Germany. He devises a clever method of robbing the secret bank vaults of notorious criminals, reasoning that the crooks will never turn to the cops. The notion that the crooks may have a few words to say to him does not dissuade Beatty as he and gold-hearted hooker Hawn work out their carefully calculated, meticulously timed robbery.

Walter Trott
as Stars and Stripes Reporter
View All

News & Interviews for $ (Dollars) (The Heist)

View All $ (Dollars) (The Heist) News

Critic Reviews for $ (Dollars) (The Heist)

The comedy sits uneasily with the admittedly efficient action scenes, although at least here we have none of the usual Brooks sermonising to dilute the brew.

Warren Beatty and Goldie Hawn are weirdly interesting together. Their acting styles lie at right angles, so you get two textures in the same scene... This contrast in the acting really works.

The result is a rather more complex and more interesting treatment than the type generally gets; qualities that work both for and against the film.

Better known for his serious dramas, Richard Brooks might not have bene the right choice for this minor and fluffy heist flick, but it stars Warren Beatty and Goldie Hawn, who are at their most physically appealing.

Beatty and Hawn carry this fun little heist/comedy picture for the first hour, but then the whole affair gets a little tiring.

Cutting more rapidly than usual, [Brooks] kept the action moving fairly entertainingly for most of the movie, with includes a long and spectacular car chase.

Audience Reviews for $ (Dollars) (The Heist)

The film lingers on way too much on the mechanics of the robbery. Goldie Hawn is quite good but I wasn't sure if she was an actress I could ever take seriously. Warren Beatty is good and dashing as ever back in this 1971 picture. I knew this would be a heist movie but it's a different kind of heist movie and yet more complex then any other heist picture I have ever seen. I also took notice of the director Richard Brooks who gives a nod to the 64 picture "Goldfinger" by casting Gert Frobe who played Auric Goldfinger in $ Frobe is a bank owner who cautiously watches his most prized possession of a huge block of gold rested at his bank. $ may sound like a cool caper but I didn't really enjoy this picture. The pacing goes on much too long and I kinda wanted to see something more and I wanted to know more about the characters then the heist plan and climax. The long chase scene feels like a downer but I was surprised when Beatty's character was pulled under the rug by the Hawn character. Broks should have ended it there but instead sells out and goes for a cheap hollywood ending.

You can guess by the titles that this is a heist movie. It's not bad, but it's just like all the other heist movies out there, nothing new. Overall, it's okay.