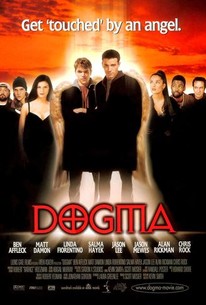 Critics Consensus: Provocative and audacious, Dogma is an uneven but thoughtful religious satire that's both respectful and irreverent.

Critics Consensus: Provocative and audacious, Dogma is an uneven but thoughtful religious satire that's both respectful and irreverent.

Critic Consensus: Provocative and audacious, Dogma is an uneven but thoughtful religious satire that's both respectful and irreverent.

The latest battle in the eternal war between Good and Evil has come to New Jersey in the late, late 20th Century. In what can only be deemed a comedy parable, two renegade fallen angels attempt to jerry-rig the entire cosmological system -- unless a rag-tag group of humans can stop faith. Bethany, the heroine of DOGMA, is a woman who feels her prayers haven't been answered when, out of nowhere, a heralding angel appears in her bedroom and declares her the potential savior of humanity. This abrupt meeting sets her off on an extraordinary journey of mystery, comedy and suspense as she is transported to a fantastical world of celestial characters and spirited adventure. Along the way she will meet up with a heaven-sent messenger, an apostle with a 2,000 year old beef, a hotheaded demon, a heavenly Muse and two unlikely Prophets known as Jay and Silent Bob as they each discover the power of their own individual faith.

Bryan Johnson
as Protestor No. 1

Walter Flanagan
as Protestor No. 2

Richard Baderinwa
as Gangster No. 2

Javon Johnson
as Gangster No. 3

Derrick Sanders
as Gangster No. 4

A very vulgar pro-faith comedy rather than a sacrilegious goof, Dogma is an extraordinarily uneven film that significant cutting might be able to transform into a playable one.

I couldn't care less whether Smith's metaphysical conceits about the war between Good and Evil are those of a devout believer or an atheist. The bottom line is that they're puerile.

Dogma is more strained than funny.

Too talky, too fond of in-jokes, too caught up (especially during the dismally weak climax) in its crass comic-strip ethos, and not, finally, as funny, subversive or thought-provoking as it would like to be.

A fresh premise gradually turns stale, and jokes that start out lively end up pooped.

Thou shalt not stop laughing.

Smith finds exactly the right pitch between the cogent religious referencing required to drive the narrative versus sending most of that religiosity up.

It's too bad Smith's trademark humor got in the way, because while the film definitely has its flaws, there's no denying that it also had the ability to serve as an intelligent debate about religion.

The true target of the film is not religion but religious dogma ...

Make no mistake, Kevin Smith's talky, farcical comedy of cosmic errors is clever. But it's clever in a deeply juvenile way.

What you hear throughout Dogma, liberally peppered with the usual prankish profanities, is Kevin Smith having a conversation with himself about his faith.

I love the way Smith pokes fun at religion. He just turns stuff around and throws it back at ya'.

[img]http://images.rottentomatoes.com/images/user/icons/icon13.gif[/img] I love Kevin Smith correction I admire him, but this is without any doubt Kevin Smith's worst film. Dogma is overlong, very annoying and despite the usually comedic cast was just plain dull. I think the characters of Jay and Silent Bob are hilarious but the film around them just didn't work. The movie is a sucker for product placement and is essentialy a huge series of recycled jokes. Smith deserves praise for small pieces of inspired black comedy and a radical attempt at being funny without being offensive but it doesn't have any taste or any consistent tone. For about half of the movie it's got characters explaining stuff to the other characters about the plot. There's too much unfunny dialogue and consequently it's just plain boring and not funny at all. I laughed out loud once, and that was seeing Silent Bob fight for a dance at a strip club but apart from that I was very very bored.

It's really hard to satire religion yet stay respectful of the religion. But this film does it. Kevin Smith is one of my favorite comedic writter/directors of our time and this film is a perfect example of his art. This is one of the only films I can stand Ben Affleck. Matt Damon should do more comedies like these. And for God sake please make another Jay & Silent Bob film please!!!

What an amazing cast! Seriously if you don't see this for any other reason, you will still enjoy it. Who would have thought this group of people would ever work together? Only Kevin Smith can pull it off so seamlessly. I love this movie, although I don't promote its ideas of religion, it doesn't matter, this movie is entertaining, funny, and exciting no matter what you believe, so don't get bogged down in that part of it. The story is utterly original and timely for people today. I highly recommend this movie.