The Dog Who Saved Christmas2009 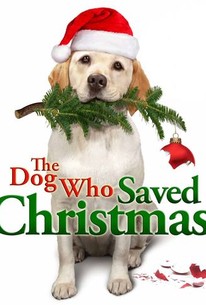 The Dog Who Saved Christmas Photos

A former K9 police dog has his day when he saves his adoptive family from a pair of holiday burglars. Christmas is coming, and the Bannister family isn't convinced that their new, laid back dog Zeus (voice of Mario Lopez) will be able to defend their home like they thought he would. When the family goes away for Christmas Eve and Zeus fends off two burglars who were looking to rob the Bannisters Blind, the once-skeptical family has a sudden change of heart.

Critic Reviews for The Dog Who Saved Christmas

There are no critic reviews yet for The Dog Who Saved Christmas. Keep checking Rotten Tomatoes for updates!

Audience Reviews for The Dog Who Saved Christmas

The Dog Who Saved Christmas is a shamelessly derivative, predictable Christmas movie that really can't help but feel like the low-budget, made-for-TV movie that it is. It's a complete rip-off of other, and not to mention BETTER, Christmas movies. A lack of a joyous Christmas atmosphere is a real buzzkill and the cringe-worthy physical gags only lessen the fun. Although this review contains some major spoilers, I suggest you just read on. There's no reason for you to actually watch this (Willingly, that is). After Zeus, a former police-dog, loses his bark, he's sent to the pound (for reasons that are beyond me..) One day, he is adopted by George, a man in need of the security of a burly watch-dog with an intimidating bark. Of course, once he finds out that the dog is incapable of barking, him and his wife ponder taking him back to the pound. Before taking him back, they go to visit grandma for Christmas, and leave Zeus at home. As soon as they leave, two wacky, cartoonish villains break in and attempt to loot the house (for decorations, apparently). This is the perfect opportunity for Zeus to prove himself as a good watch dog. He sets up multiple booby traps and after about a half hour of the robbers goofing off and getting their ass handed to them by a dog, they are ultimately defeated. If you're thinking that this sounds an awful lot like Home Alone, but with a dog, you're right. The last half of the movie is an obvious rip-off and the writers made no attempt to hide it. In the end, the dog gets his bark back and the family decides to keep him. I bet you didn't see that one coming, did you? The stars of the film are people you've probably never heard of. That's not necessarily a bad thing, but when the acting is this terrible, it's probably best that it stays that way. Gary Valentine plays the role of George. His appearance, voice, and acting style are fairly similar to that of Kevin James, who I'm personally not a fan of, but if you are, you'll probably enjoy Valentine as well. The rest of the family's acting is subpar. The two robbers are probably the worst actors in the show. Their goofiness is too unbelievable and over-the-top. The script was terrible. With lines like "There better not be a dog in there! You know how I feel about dogs! I get panic attacks", it was far too literal and left nothing to the imagination. In fact, it kind of insults the viewer's intelligence. The style of humor is mostly slapstick physical gags with a few talking toilets and gassy fat guys mixed in. Although this doesn't personally tickle my funny-bone, I do realize that a sense of humor is subjective and everybody has different preferences. If this is your sense of humor, you're in for a blast; but if not, you'll hate this movie. The Dog Who Saved Christmas was a poor effort in basically every aspect. Horrendous acting, scripts, and humor detract from the overall quality, lowering the bar for the standards of made-for-TV movies. I really wouldn't recommend this to anyone, except people who are still in their diaper days. And you know what the sad thing is? Citizen Kane was on the other channel at the exact same time, but my cousins insisted on torturing me with The Dog Who Saved Christmas instead. :(

The Dog Who Saved Christmas Quotes