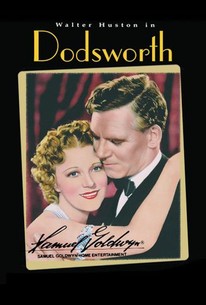 In this highly acclaimed adaptation of Sinclair Lewis's novel, Walter Huston plays Sam Dodsworth, a good-hearted, middle-aged man who runs an auto manufacturing firm. His wife Fran (Ruth Chatterton) is obsessed with the notion that she's growing old, and she eventually persuades Sam to sell his interest in the company and take her to Europe. He agrees for the sake of their marriage, but before long Fran has begun to think of herself as a cosmopolitan sophisticate and thinks of Sam as dull and unadventurous. Craving excitement, Fran begins spending her time with other men and eventually informs Sam that she's leaving him for a minor member of royalty. While in Italy, Sam runs into Edith Cortright (Mary Astor), an attractive widow whom he first met while sailing to Europe. Edith seems to understand Sam in a way his wife does not, and they fall in love. However, Sam impulsively breaks off their relationship, only to discover in her absence just how deeply he cares for her. Dodsworth was nominated for seven Academy Awards, including Best Picture, Best Actor (Walter Huston), and Best Supporting Actress (Maria Ouspenskaya), though only art director Richard Day walked away with an Oscar.

Beatrice Maude
as Mary the Maid

Wilson Benge
as Steward
View All

By far the most sensitive, restrained, and effective piece of direction Wyler ever turned in, the film achieves a measure of greatness through the dignity and depth of Huston's superb interpretation of the plainspoken Yankee.

Huston is superb as the plainspoken Midwestern businessman whose blissful world falls apart. The film remains the most emotionally compelling of Wyler's career.

The film version has done more than justice to Mr. Howard's play, converting a necessarily episodic tale, interrupted by fourteen curtains, into a smooth-flowing narrative of sustained interest, well-defined performance and good talk.

The plot may sound like a soap opera, but the acting, script, and execution are absolutely perfect.

A remarkably mature movie, full of keen insights, savory dialogue ("Love has got to stop someplace short of suicide"), and intuitive performances.

Dodsworth is another picture that sends you away with a new respect for the movies.

'The old triangle stuff' with a new rigor of scrutiny, that's William Wyler on Sinclair Lewis

The smoothly flowing film packs an emotional wallop thanks largely to the endearingly sympathetic performance of the straightforward Walter Huston.

You may wish that caution had been thrown to the wind and it had been turned into a no-holds-barred comedy.

Walter Huston is great in his interpretation of Dodsworth and how a good man eventually becomes undone.

Drama fans may enjoy this, but I wasn't into it. It was boring, I didn't care about the characters, and the story didn't interest me either. Other than that, the movie itself isn't bad.

What a great film. A forgotten film that I think everyone should see if they have not. Walter Huston is one of the great forgotten actors, and this performance was way ahead of its time. In 1936 for an actor to give such a real performance with such true emotion is amazing to watch on the screen.