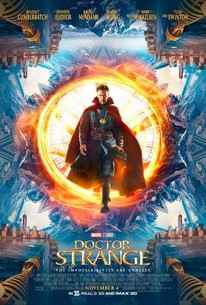 A disgraced former surgeon named Stephen Strange (Benedict Cumberbatch) becomes a powerful sorcerer under the tutelage of a mystic known as the Ancient One (Tilda Swinton). Rachel McAdams, Mads Mikkelsen, and Chiwetel Ejiofor co-star in this entry in the Marvel Cinematic Universe. Directed by Scott Derrickson (Sinister).

Tilda Swinton
as Przedwieczna, The Ancient One

Pat Kiernan
as Himself
View All

The 21 Most Memorable Moments from the MCU… So Far!
Ant-Man’s Luis and 11 More Marvel Side Characters Who Deserve Their Own Streaming Series
Marvel Movies Ranked Worst to Best by Tomatometer

Doctor Strange, intended to be a mind-bending, rule-breaking rebuke to the squares of superhero cinema, turns out to be a rebel in name only -- the textbook definition of a bad trip.

Cumberbatch, both a natural comedian and a subtle one, knows how to get a big laugh from nothing more than an arched eyebrow.

With Dr. Strange the Marvel magic seems largely to have run out-which is unfortunate, given the movie's titular protagonist is himself a magician.

Lives up to its title, in mostly good ways.

Doctor Strange is about as weird as any Marvel movie is going to get these days, which is not particularly weird.

The Marvel Comics movie universe gets a bit bigger, though not appreciably better, with Doctor Strange.

I wished I cared about what happened to the characters in this film... I didn't and I don't. Too bad.

There is more than one way to tell an origin story, and Doctor Strange sets an excellent example by altering the mold, if not entirely breaking it.

While it's not in the top 5 of the MCU, it's still a witty and energetic film that gives us something new. Yet as much as I'm already predisposed to be in the tank for the MCU, I have to admit that there's some magic lacking here.

Regardless, as clinical as the approach is, Doctor Strange succeeds at blowing the Marvel Cinematic Universe wide open.

Pretty standard stuff for a superhero flick, really, but at least it's a coherent vehicle to keep the eye-popping visuals flowing.

Scott Derrickson makes some magic with Doctor Strange. Floating in at a solid 2 hours and change, Doctor Strange pushes through sling rings at a steady pace, never moving to fast or slowing down to a crawl. While the depths of magic and sorcery don't get into nitty-gritty detail, the plot provides enough to put the pieces together. Doctor Strange relies heavily on the visuals and the CG doesn't squander. The opening sequence alone is worth the price of admission. Benedict Cumberbatch's line delivery hits the spot and is the source for some laughs. Tilda Swinton and Mads Mikkelsen deliver strong supporting performances along with Rachel McAdams and Chiwetel Ejiofor. Doctor Strange has the humor, the effects, and the entertainment value to complete the package. Now only if the warnings came before the spells.

Great movie. I am not going often to the cinema anymore but this was definitely enjoyable on the big screen in 3D.

Typically expository (and tiring because of that) like most films of the Marvel Cinematic Universe whose main objective is to introduce a new superhero, the movie is at least impressive with its psychedelic visual effects and Benedict Cumberbatch in an intense performance.