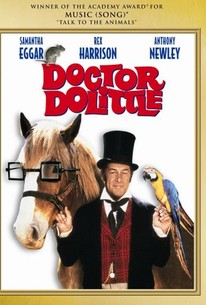 Rex Harrison, although not at all like the portly man described in Hugh Lofting's charming series of children's stories, is sheer perfection as the kindly animal doctor in Leslie Bricusse's musical fantasy Doctor Dolittle. Sadly, Harrison is the only thing nearing perfection in this overstuffed and over-mounted fiasco that nearly brought down 20th Century Fox. Considered a lunatic because he can converse in 498 animal dialects, Dolittle gathers up his friends Matthew Mugg (Anthony Newley) and Emma Fairfax (Samantha Eggar) and heads off on a journey to the South Seas to find the elusive great pink snail and the giant lunar moth. Along the way, the group encounters a succession of bizarre human and animal characters -- most notably the legendary pushme-pullyou, an animal so freakish that it compels Albert Blossom (Richard Attenborough) to burst out into the exuberant song, "I've never Seen Anything Like It in My Life." Incredibly, the film was nominated for a Best Picture Oscar in 1967. ~ Paul Brenner, Rovi

Leslie Bricusse's adaptation retains the delightful aspects while taking considerable liberty with the plot. His music and lyrics, while containing no smash hits, are admirably suited to the scenario.

It's so clumsy and pounding that taking a child to it might be grounds for a visit from family services.

[It] almost bankrupted the studio when audiences stayed away in droves. In retrospect, it's not hard to see why.

The music is not exceptional, the rendering of the songs lacks variety, and the pace, under Richard Fleischer's direction, is slow and without surprise. Indeed, toward the end it is perfunctory. Things happen mechanically.

The failures on display are legion, so many that it's hard to know where to start.

One of the worst films to be ever nominated for the Best Picture Oscar and one of the weakest Hollywood musicals of the 1960s.

Not even a decent performance from Richard Attenborough can save this disappointing production.

Doctor Dolittle might be a little woolly at times but it's impossible not to be impressed by Rex Harrison and his marvellous menagerie.

Will put the kids to sleep, but may kill you.

Soooo very bad. No need to schedule an appointment for that lobotomy you've been dying for, because here's one provided.

Just as bad and boring as Mark Harris's Pictures at a Revolution makes it out to be.

A long film that drags slightly, but Rex Harrison and his famous speaking singing voice take us into a make believe job with a fun adventure to follow. Whilst Doc Dolittle is a Musical, there were very few songs that were memorable, but the animals and adventure provide the biggest attraction.