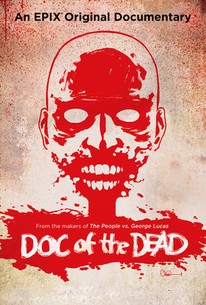 Doc Of The Dead Photos

An EPIX Original Documentary from the makers of The People vs. George Lucas that delves deep into the evolution of the zombie genre in Film, Television and Literature, as well as its impact and influence on pop culture. Featuring George Romero, Simon Pegg, Bruce Campbell, Max Brooks and many others.(C) Epix

Critic Reviews for Doc Of The Dead

Time for a brainy look at brain-eating zombies, and this one delivers like molars to skull.

It's lighthearted, breezy and overall a fun piece of pop trivia.

Doc of the Dead certainly has a lot on its undead-loving mind, it just never figures out what exactly it's trying to say.

A fantastic love letter and insightful examination of the zombie take over in society and pop culture...

A fast-paced and very informative primer on all things cinematic and zombified.

as a whistle-stop tour of zombieland, Doc of the Dead covers a lot of ground - and if it is not the first exegesis of the undead, you can be sure it will not be the last either.

You're left wishing Philippe had been bolder in his method and inquires.

While totally accessible to aficionados and casual fans alike, DotD ends up being a bit too lightweight; there's so much more that could be said especially considering the talent being interviewed.

There's some real food for thought in the film from a topic we'd assume had been bled dry.

Audience Reviews for Doc Of The Dead

The Epix documentary Doc of the Dead provides a comprehensive look at the zombie infection that has taken hold in pop culture. The film begins with an overview of the zombie's evolution throughout cinema and how they became the flesh eating monsters that we know today. It also looks at some of the cultural impacts that the undead have had in comics, literature, and entertainment attractions. Featuring hosts of filmmakers and various experts discussing the influences that have contributed to the zombie phenomenon, a variety of opinions are presented. Yet as interesting as some of these discussions are, it's kind of a scattershot of disconnected topics. Additionally, the tone is largely intent on fan service rather than objective analysis. Though Doc of the Dead is a little over-congested and haphazard, it's also a fun look at one of the more fascinating subgenres of horror.

Doc Of The Dead Quotes