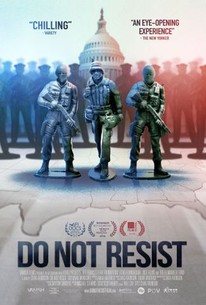 Critics Consensus: Do Not Resist takes a grim look at American law enforcement that poses crucial - and potentially frightening - questions.

Critics Consensus: Do Not Resist takes a grim look at American law enforcement that poses crucial - and potentially frightening - questions.

Critic Consensus: Do Not Resist takes a grim look at American law enforcement that poses crucial - and potentially frightening - questions.

Do Not Resist Videos

Do Not Resist Photos

Starting on the streets of Ferguson, Missouri, as the community grapples with the death of Michael Brown, DO NOT RESIST - the directorial debut of DETROPIA cinematographer Craig Atkinson - offers a stunning look at the current state of policing in America and a glimpse into the future. The Tribeca Film Festival winner for Best Documentary puts viewers in the center of the action - from a ride-along with a South Carolina SWAT team and inside a police training seminar that teaches the importance of "righteous violence" to the floor of a congressional hearing on the proliferation of military equipment in small-town police departments - before exploring where controversial new technologies including predictive policing algorithms could lead the field next.

News & Interviews for Do Not Resist

Miss Peregrine’s Home for Peculiar Children Is Imaginative but Messy

View All Do Not Resist News

Critic Reviews for Do Not Resist

This doc is a vital record of an America transitioning to martial law so quickly and stealthily that we're barely acknowledging the change.

As chilling as it is one-sided.

Doubling down as director and cinematographer, Craig Atkinson proves worthy at both assignments.

While Atkinson's intentions are good, his methods are shaky, resulting in a surface-skimming film that raises issues without ever approaching a solution.

This is not a film about racism in America. It is, instead, a film about the increased militarization of America's police forces. And it is scary stuff indeed.

Most of these bits and pieces have merit, but the connections are so loose that "Do Not Resist" amounts to little more than a grab bag.

Do Not Resist presents its strongest and most resonant piece of information in its final segment concerning the information activities and digital aspects of modern warfare being applied to law enforcement on U.S. Soil.

...an essential snapshot of American history.

There's a vibrancy to the way Atkinson gets in the thick of whatever situation he's in as his own cinematographer and allows the jaw dropping moments to speak for themselves.

Regardless your political affiliation, there's plenty within Do Not Resist that should leave you thoroughly uneasy about the growing trend of a militarized police departments.

The pervasive question of "how did we get here" is what makes director Craig Atkinson's timely documentary Do Not Resist so compelling...

Audience Reviews for Do Not Resist

There are no featured audience reviews yet. Click the link below to see what others say about Do Not Resist!

Do Not Resist Quotes