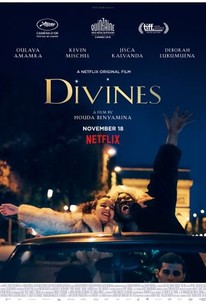 In a ghetto near Paris where drugs and religion reign supreme, Dounia is hungry for her share of power and success. Enlisting the help of her best friend, Maimouna, she decides to follow the footsteps of a respected dealer. When Dounia meets a young sensuous dancer, another window opens for her through which she glimpses the promise of a very different kind of life.

A portrait of combustible banlieue femininity, emanating raw energy and scrappy good humor even as it builds to an unexpectedly tragic and horrifying finale.

The overwhelming impression is that Dounia has ambition and vision, a conviction that she might still be able shape her own future. It's an exhilarating film.

Houda Benyamina bursts onto the scene with a punchy, pacy directorial debut, playing as gangster thriller and female buddy movie.

A work that showcases the distaff director's raw filmmaking talents but may have to fight its way out of the usual Francophone ghettos.

Divines is a thrilling and compassionate film that shows incredible promise...The bulk of the film is great in its own right, but the final 15 minutes simply leave you breathless, even if one twist is almost too cruel to believe.

Divines is at the same time overflowing, a typical case of an all-that-matters-to-me first feature, and dull, packed with clichés aimed at a mainstream teenage audience.

Like many debut filmmakers, Benyamina has the urge to cram in as many ideas and styles as possible, as though fearing she may never get another chance.

These girls are allowed to be obscene, rude, messy, and flawed, leading to an exhilarating and ultimately heartbreaking viewing experience.

Divines exemplifies the importance of diversity behind the cameras. [Full review in Portuguese]

The average moviegoer probably watches between 50 and 100 films each year, enduring some of the terrible, the surprisingly great, the Oscar-baits, or the giant tentpole blockbusters films throughout the year. Sadly, there is a very small minority, especially in countries like USA and Canada that view foreign films. I like to make a point of finding the best of the best foreign films once the year has concluded, in order to properly judge my favourite films of that particular year. France's Divines is not only a great foreign film that deserves recognition, but it is easily one of my favourites of 2016. Here is why I believe this was a necessary film and why I believe you need to see it. Growing up in the worst part of Paris, France, a young teenager becomes involved with drugs and robbery, being paid at the hands of a young woman who has been at it for years. Sparking an off-beat relationship with a dancer along the way and having to deal with the hardships of an abusive and care-free mother, Divines has much more to say to its audience than just feeling bad for a teenagers growing up in harsh environments. As we follow Dounia and her best friend Maimouna, their actions may just harm any viewer watching, due to the fact that their choices seem very believable in every scenario they are given. You just have to ask yourself if you would be this way in each and every one of their situations. The friendship these two share is what pushed the film over the edge for me, in terms of enjoyment. This film may seem like a story that revolves around Dounia, dealing with life's struggles and falling in love, but when it comes down to it, friendship conquers all here. Divines is all about making the right choices and possibly having to sacrifice the better things in life for the things you most care about, even if the outcome is not what you would expect. From beginning to end, watching these two characters evolve together was jaw-droppingly well-executed and their performances are more than worth mentioning. I found myself in tears in the final act, due to the fact that I was so invested by everything each of these characters were doing, no matter what the outcome was. It also didn't hurt that the direction of this film was tremendously done. From beginning to end, writer/director Houda Benyamina chooses to focus on the aspect of money the most. It is present during each big moment. Whether our main character has to steal it or earn it illegally, it all comes back to her roots. From living in a poor town to telling her teacher that she doesn't need an education to make money, money always plays into the over-arching story. I found myself entranced by how money itself actually became a persona throughout the course of the 102 minute run time. Money isn't everything in this world, but this film displays it in a way I have never seen before on film. Divines is unique from its raw beginning to its disheartening conclusion. In the end, Divines will make it on my list of the best films of 2016 for a few reasons. It is one of the most raw and realistic stories I have seen all year, filled with characters you can relate to, even if you have never been in these situations, it is beautifully shot, directed, written, and emotionally gut-wrenching by the final few minutes. It has not been a very good year for blockbuster films, but the independent and foreign films have been very impressive. If you are trying to go a little out of your way to find the hidden gems of 2016, Divines should definitely be on your radar. Fantastic from beginning to end. Not only is this an important film, but it's a film that anyone above the age of 18 should be able to enjoy. If you know what to expect from a french film, as far as subtitles go, I highly recommend Divines.

It is a sad, tragic and powerful social commentary, yet it is also humorous and deeply touching thanks to the wonderful performances by Oulaya Amamra and Déborah Lukumuena, who make us love their charismatic characters and wish to see their dreams come true.