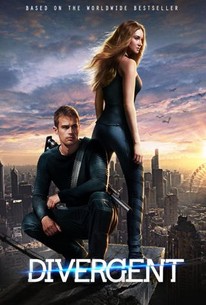 Critics Consensus: With an adherence to YA formula that undercuts its individualistic message, Divergent opens its planned trilogy in disappointingly predictable fashion.

Critics Consensus: With an adherence to YA formula that undercuts its individualistic message, Divergent opens its planned trilogy in disappointingly predictable fashion.

Critic Consensus: With an adherence to YA formula that undercuts its individualistic message, Divergent opens its planned trilogy in disappointingly predictable fashion.

DIVERGENT is a thrilling action-adventure film set in a world where people are divided into distinct factions based on human virtues. Tris Prior (Shailene Woodley) is warned she is Divergent and will never fit into any one group. When she discovers a conspiracy by a faction leader (Kate Winslet) to destroy all Divergents, Tris must learn to trust in the mysterious Four (Theo James) and together they must find out what makes being Divergent so dangerous before it's too late. Based on the best-selling book series by Veronica Roth. (C) Summit

Shailene Woodley
as Tris Prior

Ben Lloyd-Hughes
as Will

The film is more interesting than the average bad movie precisely because it so gratuitously, and even thematically, fails to fit together.

The conflicts inherent in old-fashioned high school movies are accommodated, with bullying to stir the blood and romance to set the heart thumping. But Divergent's assimilation of all this fails to excite.

Romance and self-realisation wrapped in violence now sell a whole lot of tickets. At least Divergent has more to ponder than most of the field.

This is a slickly made, energetic teen sci-fi yarn, let down by its derivative and schematic storyline.

Those with a high tolerance for blockbusters in which non-fetishised females save the day will be able to put up with its flaws - including lacklustre action sequences and a preoccupation with tattoos.

What a conformist message.

It's like Hunger Games, meets Enders' Game, meets every YA book you've ever read.

Divergent suffers in comparison to Hunger Games. But when judged alone, Divergent makes a strong case for the entertainment value of an empowered young female hero attempting to survive and resist in a dystopian society.

A possibly compelling idea gets lost in the mire of trying to be appealing to a core audience that doesn't want to work hard for narrative reward.

This is a rite-of-passage film, with action, romance and self-realization woven in. But unlike some others of this genre, Divergent is thought-provoking teen sci-fi.

Saved by Woodley and James' performances, Divergent has every trope a teenage fan could ask for, and not much else.

Not bad for YA rehash.

Certainly better than I expected. While the plot can be a bit formulaic and stretched out, this YA novel adaptation slightly rises above with it's intriguing premise (with hints of philosophical intrigue that I hope will get explored more in the two sequels), a solid cast (Shailene Woodley gives a compelling turn as Tris, the film's action heroine), and well-directed action sequences.

Neil Burger's Divergent diverges from greatness. Running for a 130 minutes, the story never finds a consistent pace; taking much too long to develop and rushing with its ending. By employing the lengthy buildup, the film manages to drop interest by the time it begins to pick up for its finale. There isn't much action, it isn't much of an a adventure, and the special effects are used sparingly. Nothing noteworthy stands out in this department. The characters are bland along with much of the performances. Shailene Woodley is difficult to take serious with her role, although the lack of action makes it more reasonable. Theo James is as monotone as his character's name. Four. Divergent does enough to get by, but not enough to be a recommendation.

When I first saw the trailer for this I rolled my eyes and said "Hunger Games ripoff". Now, it's not a ripoff, but had "Hunger Games" not been a success I doubt this would have been made. I'm not really going to try to describe the story of this movie, but if you don't know it won't make a lick of sense. It's a little complicated and requires your full attention. Now, when I watched it it was one of those "on in the background" situations where I was doing something else and not watching as intently as I should have been. But, I got the jest of it. Shailene Woodley is fantastic and really the biggest reason to watch this. The effects and overall story are just ok, but Woodley is electric. She is a star on the rise for sure. For what it is, it's decent enough. Girls will probably like this a lot more than the guys will, because it doesn't have a whole lot of action. But, it is interesting, and I'll check out the sequels for sure. Just have to make sure I rewatch this as a refresher. Worth a watch.