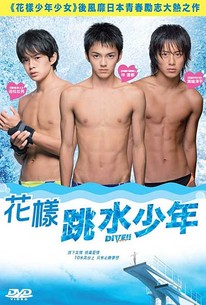 Three young men try to turn their dreams of Olympic gold into a reality in this sports drama from Japan. The Mizuki Diving Club has enjoyed a reputation for transforming talented young divers into world-class champions, but in recent years the club has had a run of bad luck, and with few winning divers emerging from their ranks, sponsorship is dwindling and unless things change the MDC could go out of business. Faced with this grim possibility, the head coach (Ken Mitsuishi) swallows his pride and brings in Coach Asaki (Asaka Seto), a lovely but determined instructor who intends to restore the MDC to its former glory. Asaki puts her focus on three young divers she's convinced have the greatest potential -- Yoichi (Sosuke Ikematsu), the head coach's son, who despite his talent had has problems living up to his father's expectations; Shibuki (Junpei Mizobata), a loner given to sharp mood swings; and Tomoki (Kento Hayashi), who Asaki feels has the potential for greatness despite his less-than-impressive record. With qualifying events for the Olympics coming up soon, Coach Asaki pushes herself and her students to the limit, preparing Yoichi, Shibuki and Tomoki for the all-important qualifying meets, but can the boys handle the pressure that comes with the most prestigious event in sports? Dive!! is based on a novel by Eto Mori, which was later adapted by the author into a popular manga series. ~ Mark Deming, Rovi

There are no critic reviews yet for Dive!!. Keep checking Rotten Tomatoes for updates!

There are no featured reviews for Dive!! at this time.