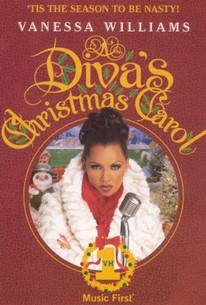 "Christmas Can Be Such a Bitch" was the tasteful advertising tag line for this updated and revised TV-movie adaptation of Dickens' oft-filmed fable A Christmas Carol. This time around, Victorian penny-pincher Ebenezer Scrooge as been transformed into a beautiful, imperious, foul-mouthed pop singer named Ebony (Vanessa L. Williams). Lording it over her staff in general and her long-suffering manager and former boyfriend Bob Cratchett (Brian McNamara) in particular, Ebony intends to callously exploit the Yuletide season by staging a charity Christmas concert "on behalf of the homeless," an act of "generosity" designed mainly to up her popularity and increase her own bank account. Inevitably, on the eve of the concert, the contentious Ebony is visited by a number of spirits who persuade her to change her ways before it's too late. Chilli of TLC is seen as the ghost of Ebony's former singing partner Marli Jacob while Duran Duran's John Taylor shows up as the Spirit of Christmas Present. No better or worse than any other "improved" version of the Dickens original, A Diva's Christmas Carol was filmed in Montréal and telecast over VH1 on December 13, 2000.

Kathy Griffin
as Ghost of Christmas Past

Brian McKnight
as Himself

There are no critic reviews yet for A Diva's Christmas Carol. Keep checking Rotten Tomatoes for updates!