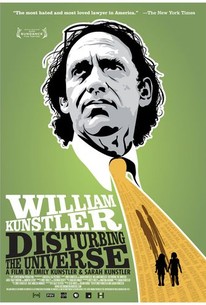 Critics Consensus: It doesn't even feign impartiality, but this family-made documentary about the famously rabble-rousing attorney shines a light on the life and times of a divisive public figure.

Critics Consensus: It doesn't even feign impartiality, but this family-made documentary about the famously rabble-rousing attorney shines a light on the life and times of a divisive public figure.

Critic Consensus: It doesn't even feign impartiality, but this family-made documentary about the famously rabble-rousing attorney shines a light on the life and times of a divisive public figure.

During the second half of the 20th century, William Kunstler was one of the most admired attorneys in America -- and one of the most hated. Kunstler was a man who thrived on controversial cases; in the 1960s, he specialized in defending clients who ran afoul of the law on civil rights and free speech issues, and he spoke on behalf of Martin Luther King, Malcolm X, Lenny Bruce, members of the Black Panther Party, Native American activists, and prisoner's rights groups. Kunstler found himself in the national media spotlight in 1969 when he defended "the Chicago Eight," activists who were accused of organizing riots during the 1968 Chicago Democratic Convention; his flamboyant style in the courtroom fascinated the press, and some believe he soon became as interested in getting his name in the papers and his face on television as he was in the law. In his later years, Kunstler developed a reputation as a man who would defend clients no one else would touch, including drug dealers, accused rapists, organized crime figures, and suspected terrorists, though he remained a passionate advocate of the American legal system. Kunstler's daughters, Emily and Sarah, began asking their famous dad questions about his career and his ideals as children armed with a home movie camera, and they've used some of that footage -- along with vintage newsreels and interviews with Kunstler's friends, foes, and clients -- as the basis for the film William Kunstler: Disturbing the Universe, a biographical portrait of the man and his legacy. William Kunstler: Disturbing the Universe received its world premiere at the 2009 Sundance Film Festival.

Like the recent animated documentary Chicago Ten, this is a timely reminder of a era when "change" was more than just a campaign slogan. But it's also a personal portrait, with shadings.

William Kunstler: Disturbing the Universe offers a deeply personal view of a larger-than-life figure. It's a view filtered through a prism of memory and emotion, but one well worth investigating.

Leading the defense in the 1969-70 trial of the Chicago Seven, William Kunstler became a radical and a celebrity, and this vivid documentary captures how those two facets of his life worked together in morally urgent and contradictory ways.

Terrific archival footage from a range of seminal civil rights events, as well as affecting narration written by Sarah Kunstler and spoken by Emily Kunstler (who also edited the film), round out this superior documentary.

Kunstler's accomplishments, principles and courage are all here in Disturbing the Universe. But there is something else that adds an unexpected layer of emotional complexity.

A testament, at least in part, to Kunstler's long and controversial career as a lawyer-activist, defending members of minorities and unpopular causes, and changing the law and the country in the process.

Tries to examine and then reconcile Kunstler's legacy as a fighter for causes with his choosing to defend mobsters, terrorists, rapists and drug dealers.

Still worth seeing despite the co-directors' inability to understand that a great lawyer will go out of his or her way to defend people being tried and convicted in places like the NY Post.

One of the most pronounced recent trends in documentary is the use of the medium as a form of public therapy.

The radical lawyers' daughters - Emily and Sarah Kunstler - provide us with an intimate if not always flattering portrait of the man The New York Times once called 'the most hated and most loved lawyer in America.'

A very moving tribute to an underappreciated hero who spent his life as a tireless defender of the defenseless.

Normally, I hesitate whenever there is a documentary about a notable figure by family members, due to their general lack of perspective on the subject.(I'm thinking especially about a disappointing documentary about cinematographer Haskell Wexler.) In the case of "William Kunstler: Disturbing the Universe," Kunstler's daughters by his second marriage, Emily and Sarah, actually manage to add perspective to the life of this (in)famous lawyer who was especially interested in seeing that everybody in the court system received representation, no matter what they were accused of. With the assistance of revealing material including home movies and personal reminisces that recall his life from civil rights lawyer to radicalization and beyond, Sarah and Emily Kunstler provide new insights on such already familiar territory like Chicago 8, Attica and the siege at Wounded Knee. For example they talk to one of the jurors on the Chicago 8 trial jury who was also radicalized by the experience. Along with some interviews with notables, this altogether reveals a complex portrait of a complicated man.