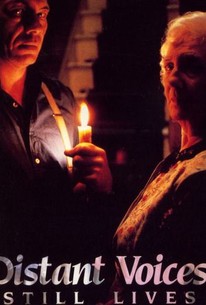 Thirty years after its initial release, one of the most acclaimed films in British cinema history returns to the big screen in a new 4K digital print restored by the BFI from the original camera negative. Terence Davies' partly autobiographical tale evokes his upbringing in Liverpool after the war in a working-class home dominated by the violence of his father, fearsomely played by then newcomer Pete Postlethwaite. Using dynamic lighting, a superb soundtrack and a fragmented structure, Davies constructs a distinctive drama suffused with both beauty and horror. The film was voted the third greatest British film of all-time in a 2011 Time Out poll. (35mm print is from 2007 restoration).

Nathan Walsh
as Tony as a child

Susan Flanagan
as Maisie as a child

For all the formal technique and the theatrically controlled tableaux, the drama is vividly present and alive.

With an unfailing eye for place, décor, costume, and gesture, the director glides his camera through tangles of memories to evoke joys and horrors with a similar sense of wonder.

A gripping and original piece of work, itself sure to be remembered as one of the finest films of the year.

Just as you think you have its moves all doped out, a scene of such shocking beauty flashes before you that it takes your breath away.

When a forty-four-year-old man makes a movie about his family and friends sitting around singing old tunes, you certainly don't expect an unforgettable amalgam of humor and heartbreak. But that is precisely what Terence Davies delivers.

Strange and stunning for a variety of reasons, Terence Davies created a masterpiece right out of the gate with his 1988 classic Distant Voices, Still Lives.

The saddest part of Distant Voices/Still Lives is that we come away understanding no more than we did before about the inner workings of this and similar families.

Terence Davies' 1988 debut Distant Voices, Still Lives, newly rereleased by Arrow Academy, deserves to be treasured as one of the great British films.

Distant Voices contains some of the most beautiful, poetic filmmaking in British cinema.

Even the movie's "smile though your heart is aching" optimism is depressing. What keeps the movie going is the director's always distinctive, sometimes arresting style, and the earnest, authentic acting.

A rigorously controlled account of the experience of Davies's older siblings growing up in a working-class Merseyside terrace in the Forties and Fifties.

Terence Davis moving, harrowing and elegantly artistic masterpiece is one of the few Britsh films of recent years to embody a distinctly British identity. The plot involves a family wedding in working class Liverpool just after the second world war and the various episodes in the family's past dealing with their sometimes brutal and disturbed father. The beauty of the film lies in the deeply artistic composition of various shots, coupled with Davis' enduring compassion and understanding for the chararcters, especially the father played brilliantly by Pete Postlethwaite. It is an incredible evocation of family life and even though at times it makes for hard viewing, this is a film that must be seen.

Terence Davies's autobiographical film of working-class life in 1940s/50s Liverpool. A brilliant, emotional and powerful film full of great acting. The story is told through memories and switches between childhood and adulthood. Unique and highly recommended.

Pete Postlethwaite never made enough films for me. A great earlier performance from him here.