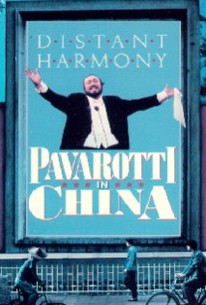 This is a filmed record of Luciano Pavarotti's first trip to China. As a climax to several touristy sequences, Pavarotti performs at his near-peak in the Great Hall (he even shows up on time; take note, American opera fans). Beyond the music, the film is a textbook of "culture clash" vignettes. Along the way, however, we also see that those clashing cultures have quite a few things in common. Distant Harmony: Pavarotti in China is not as deep or meaningful as the Isaac Stern documentary From Mao to Mozart, but Pavarotti's charisma gets us over the rough spots. ~ Hal Erickson, Rovi

... a cheerful documentary about the tenor's tour of the country in June 1986.

Despite its deficiencies, Distant Harmony ends up being a surprisingly poignant experience.

There are no featured reviews for Distant Harmony: Pavarotti in China at this time.