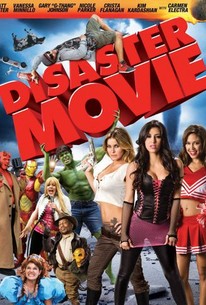 Critics Consensus: Returning to their seemingly bottomless well of flatulence humor, racial stereotypes, and stale pop culture gags, Jason Friedberg and Aaron Seltzer have produced what is arguably their worst Movie yet.

Critics Consensus: Returning to their seemingly bottomless well of flatulence humor, racial stereotypes, and stale pop culture gags, Jason Friedberg and Aaron Seltzer have produced what is arguably their worst Movie yet.

Critic Consensus: Returning to their seemingly bottomless well of flatulence humor, racial stereotypes, and stale pop culture gags, Jason Friedberg and Aaron Seltzer have produced what is arguably their worst Movie yet.

The filmmaking team behind Date Movie and Meet the Spartans is back with a comedy spoof sending up disaster movies in this Lionsgate production. Matt Lanter, Vanessa Minnillo, G-Thang, and Kim Kardashian head up the cast as a group of concerned citizens willing to do whatever it takes to save planet Earth from being incinerated by falling meteors or overrun by rabid chipmunks. Along the way, everything from High School Musical to Cloverfield gets the parody treatment. Carmen Electra and Tony Cox co-star.

Matt Lanter
as Will

Gerard A. Facchini
as Iron Man

Disaster Movie is the latest and most slap-dash of the movie parodies to atrophy out of the Scary Movie franchise.

A dumb, dumb film, to be sure, but also undeniably funny in more spots than a right-thinking, mature adult person feels comfortable admitting.

A woman a few rows in front of me at the preview chose to write 20 minutes worth of text messages, rather than watch the movie. Even though she was not paying, the price was clearly too high.

I wish to God they would find something else to do.

Of Disaster Movie it is difficult to speak, or even think, articulately, a handicap that seems to have afflicted the film's makers.

Surely even bovine American teenagers have to realise their intelligence is being insulted sooner or later.

Nothing more than a 90-minute barrage of unfunny jokes without the hindrance of a pesky plot or character development to get in the way.

Depressingly, these magpie parodies are so cheap to produce they can't fail to make money -- which probably means this interminable franchise is far from over.

Deflating these images only works when they've overstayed their welcome in the cultural landscape, and making fun of the rejects doesn't have the same punch.

The pomposity of big-budget B-movies can certainly be taken down a notch, but Friedberg and Seltzer rely too much on trailer moments for their broad comedy.

There's no nice way to say this, so I'll just say it: Writer/directors Friedberg and Seltzer are a scourge. They're a plague on our cinematic landscape, a national shame, a danger to our culture.

This might have been edited down to 20 minutes of entertaining film. Maybe one day the team involved will start employing editors and produce something we can all look forward to.

Aptly titled film, this is an awful mess from start to finish that isn't funny whatsoever. The jokes are awful, stale, and above all stupid. To me, it's shocking to see these two hacks making garbage, as they have no talent whatsoever in making enjoyable films for an audience. If you're expecting something funny, you won't find it here, this is a pointless film, with no care at trying to make genuinely funny jokes, instead opting for the lazy, gross out humor as pop culture reference that these two talentless filmmakers seem to enjoy so much. I hope one day that they'll stop making films, they should not be allowed near a camera. To me, these two are the worst filmmakers alive. At least on occasion, Uwe Boll has made decent flicks, but man Friedberg and Seltzer are far worse in my book, but that's my opinion. Their filmography is pure garbage, with nothing that stands out At least Boll, made Rampage, Seed, and Assault on Wall Street all interesting in their way, but these guys simply are beyond awful and they should just give up at making "films". Disaster Movie is not interesting, entertaining, funny or memorable. This is one of those films that you want to forget and you ask yourself why you watched this. This film scraps the bottom of the barrel of bad ideas, and nothing gels together, and everything falls flat into a big train wreck, or should I say disaster? Avoid this film at all costs; it's not worth the celluloid it's filmed on. Disaster Movie ranks as one of the worst films I've ever seen, and it's an exercise in bad filmmaking. Like I said, these two make Uwe Boll look good.

Some slightly funny moments, but mostly because it's so stupid but they think it's brilliant. It's better to laugh at how rubbish it is than complain.

I did laughed... maybe once? I think the bloopers at the end is funnier than the movie.