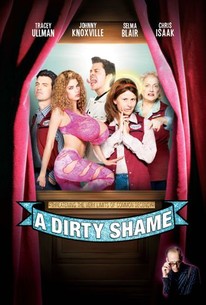 Critics Consensus: John Waters casts his provocative eye toward libido in a sex satire that won't leave audiences feeling too Dirty, but this sophomoric farce doesn't strike a nerve like his best work -- a real Shame.

Critics Consensus: John Waters casts his provocative eye toward libido in a sex satire that won't leave audiences feeling too Dirty, but this sophomoric farce doesn't strike a nerve like his best work -- a real Shame.

Critic Consensus: John Waters casts his provocative eye toward libido in a sex satire that won't leave audiences feeling too Dirty, but this sophomoric farce doesn't strike a nerve like his best work -- a real Shame.

Lust is in the air on Harford Road and Sylvia Stickles, a grumpy, repressed middle-aged Baltimorean, doesn't like it. Though Sylvia's handsome husband Vaughn still has marital urges, his wife could not be less interested -- she has more important things to do. Not only does Sylvia run the family's Pinewood Park and Pay convenience store, she's also responsible for watching over her exhibitionist daughter Caprice. A go-go dancer known to her adoring fans as Ursula Udders, Caprice and her stupendously enlarged breasts are currently under house arrest after several "nude and disorderly" violations. But Sylvia's world is turned upside down one day after suffering a concussion in a freak traffic accident. Sexy tow-truck driver Ray-Ray Perkins rushes to her aid, and the stricken Sylvia realizes he is no ordinary service man; he's a sexual healer who brings Sylvia's hidden cauldron of lust to the boiling point.

Mink Stole
as Marge the Neuter

David A. Dunham
as Mama Bear

Jonas Grey
as Warren the Mailman

Ricki Lake
as Herself

Kevin Reese
as Ronnie the Rimmer

Michael Willis
as Tony the Tickler

Richard Salamanca
as Fat Boy A

Britt Prentice
as Fat Boy B

Jeanette Chivvas
as Fan on Airplane

Critic Reviews for A Dirty Shame

This exercise in bad taste is the Dawn of the Dead of nymphomania. Never mean-spirited, A Dirty Shame has some big laughs, but it's a one-joke movie that shows its strain well before the finish line.

The story is trite and uninteresting. And the humor is only occasionally funny, and that's largely because it's almost impossible not to be impressed by Tracey Ullman's manic energy.

Makes sex seem the least exciting thing in the world. And that's a dirty shame, indeed.

... you can have an open mind and hate this movie because I good well hated this movie.

[Waters] hasn't let slick technique take over as has Hollywood, and he retains his radical sensibility and his willingness to go where others haven't.

Ray-Ray says it best: 'It's like Noah's Ark around here; there's one of every perversion. Alas, it's all been done.'

Waters has made a resolutely unsexy sex comedy, but he hasn't left out the comedy.

On the one hand it depicts what the world might be like if women had the same constancy of sexual desire that men have, but on the other hand, it has the intelligence level of a teenage boy's dirty joke.

Exploring the wide divide between prudes and the world of sexual excess, there's enough bad taste on display to shock, amuse and entertain. Sizzles when hot, fizzles when not

A Dirty Shame is a fabulously funny exploration of fetishism, a look at the ever-more-insane ways people find to 'get off'.

Wow. The challenges of reviewing an NC-17 movie for a family newspaper are, um, challenging.

Audience Reviews for A Dirty Shame

Mediocre comedy with a few laughs strewn throughout, A Dirty Shame directed by Pink Flamingos director John Waters should have been much better considering its premise. Unfortunately, the film has a weak script that just doesn't deliver what it should have. I really wanted to enjoy the film, but most of the gags fell flat, and Waters can't seem to construct something memorable here. I will say this, this is far better than the awful mess Pink Flamingos, and he has managed to make something with a bit of humour, but overall due to its script, and lack of effective ideas, the movie as a whole suffers. The cast could have been better as well, and there is no one that stands out. This film should have been much better than what it turned out, and it's a shame because it could have been something really amusing. Aside from a few laughs, the film lacks something to make an effective comedy. I really wanted to enjoy the film, and I can see that this was a film that had plenty of great ideas that was halted due to a lacking script. If the script would have been significantly tighter, with better gags, I think A Dirty Shame would have a very good film. Instead we get a mediocre comedy with mild laughs and so-so acting. The cast is varied enough, but there is just no spark to really make this film take off. A Dirty Shame is a film that has plenty of potential, but ultimately just disappoints the viewer that wants something more out of their viewing experience.

Waters try to make this film a extremely funny and dirty. The thing is: he transform A Dirty Shame in a very silly movie. However, still commit some laughs.

A Dirty Shame is the perfect title for this movie. Its got all the random, demented, kitschy and riotous humor that most John Waters movies have. I won't lie when I say I was laughing uncontrollably and obnoxiously for the first 45 minutes of this movie. Unfortunately A Dirty Shame turns into a pile of pointless nonsense that was always there with this movie, but my tolerance kicked in and kind of expected a little more making the movie... a dirty shame. This definitely wasn't my first rodeo as far as John Waters was concerned but I guess I just wanted a little more plotwise. Don't get me wrong, this movie was hysterical and well worth the NC-17-rated watch for the hokey pokey scene alone. It just fell apart at the end.

The film as a whole has all the uninteresting raunch you'd expect with a John Waters film, but the mere fact that this isn't a shell shocked nation, and Divine isn't drag queening it up made an unimpressive impact. That the film has a NC-17 rating probably drew in some unsuspecting viewers, and possibly the film was making some sort of statment, but that statement just seemed to be "trying too hard."