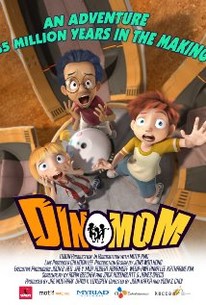 Three mischievous kids travel back to the time of dinosaurs, where they're adopted by a nurturing mother T-rex as they search for the missing piece of the time machine that will take them back home in this animated fantasy adventure for the entire family. When Ernie isn't hanging out with his best friend Max, he can usually be found blasting around town on his rocket powered skateboard. One day, as Ernie and Max are marveling at the new egg-shaped time machine recently completed by Max's father, Ernie's troublemaking sister Julia surprises the pair, and before they know it all three are standing face-to-face with a real life T-rex named Tyra (voice of Melanie Griffith). Having just crash landed in Tyra's nest, the trio quickly realizes they've just become the newest members of a happy Theropod family. Along with Tyra's hyperactive son Dodger (voice of Rob Schneider), Ernie, Max, and Julia embark on the ultimate Mesozoic adventure. But somewhere along the way, they lost the power key to their time machine, and without it they'll never get home. Meanwhile, a pair of scheming dinosaurs (voices of William and Stephen Baldwin) plot to lure Tyra into their cave by stealing her precious "egg". Now, the time traveling trio must race to find the key and outsmart the diabolical dinosaur duo if hold out any hope of making it back home before getting into a heap of trouble.

There are no critic reviews yet for Dino Mom. Keep checking Rotten Tomatoes for updates!

There are no featured audience reviews yet. Click the link below to see what others say about Dino Mom!