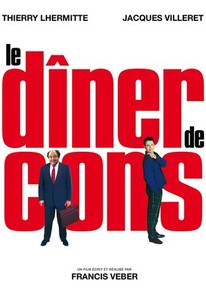 Francis Veber wrote and directed this film adaptation (with animated opening credits) of his own play, Le diner de cons, about a competition among a group of friends to see who can find the stupidest person to bring to dinner (as indicated by the original French title, since "con" means someone who's a total dumbbell). The dinners are held each Wednesday night, and French publisher Pierre Brochant (Thierry Lhermitte) has found a world class nincompoop -- Finance Ministry accountant Francois Pignon (Jacques Villeret) who uses matchsticks to build small-scale replicas of monuments. Things quickly go awry after Pierre wrenches his back at golf. He nevertheless makes an effort to attend the dinner with his prize dunce. Francois arrives at Pierre's luxury apartment, but Pierre is in such pain they never exit the apartment for the dinner. Instead, Pierre is trapped in a situation where Francois' stupidity turns his life into a comic hell. In 1993, Villeret created the role of the dimwit onstage during 600 performances of a 27-month run, and the play also had a 1994 London production. In addition to Veber's Oscar-nominated screenplay adaptation of Jean Poiret's La Cage aux Folles (1978), reworked into The Birdcage (1996), other American comedies originated in French screenplays by Veber -- The Toy (1982), The Man with One Red Shoe- (1985), Three Fugitives (1989), and Fathers' Day (1997). Shown at the 1998 Cannes Film Festival. ~ Bhob Stewart, Rovi

Laurent Gendron
as Guest 2
View All

Despite the stagey set-up (it was originally conceived as a play and it shows), the film manages to maintain its humor and energy until the final scene in which Veber suddenly casts aside his delightful meanspiritedness and gets soft-hearted and preachy.

Some realist nuances in the characters' behavior become more intriguing than the belabored humor.

A sip of sparkling champagne in a moviegoing summer of mostly cheap red wine for teenage winos.

The leads fill out their archetypes comfortably, the timing's well pitched, and the narrative moves busily enough. Cinematically, though, there's little of interest.

One of the best of the crop of new movies, The Dinner Game, is a telling assault on the ironic sensibility.

Scared of sophisticated French cinema? This coarse comedy will restore your confidence.

Its very tautness and on-the-money performances from the odd-coupled Jacques Villeret and Thierry Lhermitte help make this a highly amusing and old-fashioned big-screen entertainment.

If you don't like this type of movie to begin with (I don't), you won't be converted this time around.

Easily the funniest and most charming film that has been or will be released in 1999 ... period.

An idiot is exactly what you'll be if you don't check out The Dinner Game.

With the action almost entirely confined to an apartment and centered on unstoppable dialogue from beginning to end, this is a very funny comedy of errors (adapted from Veber's own play) that doesn't try to hide its obvious theatrical origins and yet feels always fresh and dynamic.

A smart idea for a film is plagued by a poorly written script that is dull, uninteresting. Le Diner de cons could have been a great film, and it might have looked good on paper, but the on-screen result is that of a film that is unfocused, with poor attempt at humor, and yes, I do get French humor, but this film just failed to make me laugh. I expected something really funny with the film, and considering the idea for the film, you'd think it would be one hilarious film. Unfortunately it wasn't. This film as a whole was just long and boring with nothing interesting going on-screen. I think it's a great shame because this film could have been great. Unfortunately it suffers from an underdeveloped script that fails to be very funny. The cast try to save this film from failing, but it does anyway. Director Francis Veber would later redeem himself with The Closet, a much funnier film with a far better cast. This film just doesn't have the comedic elements that make up a good comedy. Most of the comedy falls flat. The films script could have been rewritten to develop better jokes. If you want a good French comedy watch some Louis de funes films and OSS117 instead. Avoid this one; this film simply isn't worth watching. Overall it's a shame that the filmmakers couldn't have made a better film out of this, and the result is a train wreck that just fails on so many levels. Spend your time watching something else, you'll be glad you did.

Wonderfully simple, but emotionally engaging comedy. The film takes its audience on a wonderful journey as we start feeling very sorry for Villeret. The film is very cruel towards him at first. He's just a sweet, naive man looking for some acceptance. He soon turns into the guest from hell, as his lack of intelligence does turn into annoyance. Finally, his acts bring justice upon those that would make fun of him. It's a feel good comedy, that gradually builds an unexpected friendship. It's also nice to see the characters in on the joke as well. Too often comedies have their own characters ignore the hilarity around them. The dialogue is quick and witty and the film does what it can in its space and time. About to be remade with Paull Rudd and Steve Carrell, the trailer for that promises to expand on the events, but will the heart and humor remain intact? This is a mini French gem.