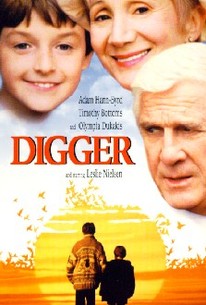 This oddly unsettling PG-rated film stars Adam Hand-Byrd as Digger, a 12-year-old whose parents are going through serious domestic problems. To keep him out of the line of fire, Digger is sent to live with his crusty grandmother Olympia Dukakis in the Pacific Northwest. He has a great deal of difficulty adjusting to his new environment, but soon he and the locals are the best of friends. A subplot concerns grandma Dukakis' rollicking romance with suave Leslie Nielsen. Rodney Gibbons' script takes some curious side trips into the Morbid, with Digger making the acquaintance of some very tragic characters. Digger was completed in 1992, copyrighted in 1993, and finally given limited release in 1994.

Andrew B. Parker
as Neville Jackson

There are no critic reviews yet for Digger. Keep checking Rotten Tomatoes for updates!

There are no featured reviews for Digger at this time.