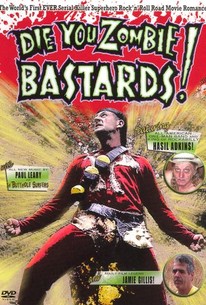 A lovable serial killer sets out on a harrowing journey to find his wife and defeat the scheming villain planning to enslave the population by transforming everyone into mindless zombie slaves in a scalding, hyper-charged instant cult classic starring rockabilly pioneer Hasil Adkins and featuring new music by Paul Leary of the Butthole Surfers. Red Toole isn't your average murderous psychopath, and when he discovers that his lovely bride Violet is currently being held prisoner by villainous Baron Nefarious, the race is on to save the girl and prevent the power-mad baron from accomplishing his ambitious goal of world domination.

At best, this film could be described as an under-par Trauma film. At worst, even comparing it to other tasteless trash cinema pieces, it still ranks under-par.

I grew tired of Die You Zombie Bastards! by the fifth minute. By the tenth, I completely hated the thing.

You will laugh your Socks off.

Anyways see this flick if you want great satire of the oddest movie genre in history (zombies).

"So Fucked Up" highlight:
couple of zombie hos beat a four foot zombie penis with ketchup and mustard containers for all of their mutually assured sexual pleasure

You need to see this to believe it.

I couldn't make it thru the movie. It's a home movie with a little extra.