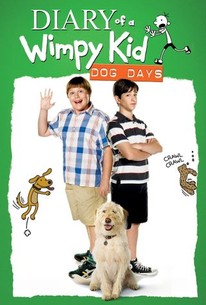 Critics Consensus: Overly familiar and a bit too reliant on slapstick, the sitcom-like Dog Days fails to improve upon previous installments and will likely appeal to few outside its target audience.

Critics Consensus: Overly familiar and a bit too reliant on slapstick, the sitcom-like Dog Days fails to improve upon previous installments and will likely appeal to few outside its target audience.

Critic Consensus: Overly familiar and a bit too reliant on slapstick, the sitcom-like Dog Days fails to improve upon previous installments and will likely appeal to few outside its target audience.

During his summer vacation, "Wimpy Kid" Greg Heffley, the hero of the phenomenally successful book series, hatches a plan to pretend he has a job at a ritzy country club - which fails to keep him away from the season's dog days, including embarrassing mishaps at a public pool and a camping trip that goes horribly wrong. -- (C) 20th Century Fox

News & Interviews for Diary of a Wimpy Kid: Dog Days

View All Diary of a Wimpy Kid: Dog Days News

Critic Reviews for Diary of a Wimpy Kid: Dog Days

Viewers enduring early adolescence or those grappling with its psychic scars will recognize the honesty in the comic humiliation.

Though often self-centered and conniving, Greg remains a likable kid, and the movie entertains by pulling off over-the-top scenarios that set up digestible life lessons for youngsters.

Released right when summer starts to drag, Diary of a Wimpy Kid: Dog Days at least doesn't add to the exhaustion.

Rather good, skewering pre-teen anxieties with some wit and accuracy and sweetening the deal with dollops of gungy slapstick.

For grumpy parents desperate for a few hours of peace, what's not to like?

Old-fashioned and small in scale, the movies sometimes feel like after-school specials from a bygone era, which is part of what makes them so endearing.

Don't let the dog days of summer get you down! Diary of a Wimpy Kid: Dog Days is filled with laughter, love and fun for the whole family.

These kids clearly had the time of their lives making this, with its gee-whiz sense of humor and clever integration of animation connecting the characters to their hand drawn literary counterparts.

A solid family-friendly film that embraces its quirky characters and their mischievous adventures.

With "Dog Days" and its been-there, done-that screenplay, the franchise takes a step backward.

With their recurring characters and suburban Anytown USA setting, these films represent a throwback to the assembly-line days of 'Andy Hardy' and 'Blondie' movies: They lack surprise but not laughs.

More efforts not to be wimpy.

Audience Reviews for Diary of a Wimpy Kid: Dog Days

Not so wimpy after all! Good movie! This film is the third film in this popular series and is based on the Diary of a Wimpy Kid books, which are written by Jeff Kinney. The entire movie flowed well, no moments felt dry, and that can be a big problem with some movies today. Overall, Diary Of A Wimpy Kid: Dog Days, is a great, fun, enjoyable film for the family. I can't wait to see what the studio is going to do next! School is out and Greg is ready for the days of summer, when all his plans go wrong. What on earth is he going to do all summer?

During the summer Greg joins a country club to get close to a girl.

"Diary of a Wimpy Kid: Dog Days" is the third installment in this fantastic series of family movies. This time around the kids are on Summer break before the 8th grade and anything that can go wrong, does. All Greg wants to do is play video games, but his Dad wants him to get out of the house more. So, Greg uses Rowley's country club membership to get to know a girl, while lying to his Dad saying he has a job. That is the jest of it, anymore and it may ruin some of the plot details. This isn't the best of the three, but it's still a great entry. The humor is dead on, and all the performances are great. Steve Zahn has a much bigger role here, which is good because Zahn is always great. Also, this movie features the greatest cover of Justin Beiber's song "Baby", it has to be seen to believe. I wouldn't say this series gets better and better, but it's still entertaining and funny, which matters most. Perfect family movie for kids and adults. My wife and I went on a little date(our kid is too young to go to the movies yet), and we loved it and laughed more than most the kids in the theater. Probably not a must see, but definitely worth a watch or two.