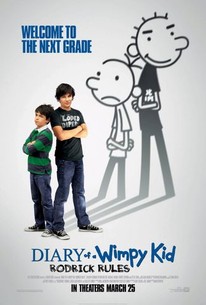 Critics Consensus: Moderately witty and acceptably acted, Diary of a Wimpy Kid 2 isn't much worse than the first installment.

Critics Consensus: Moderately witty and acceptably acted, Diary of a Wimpy Kid 2 isn't much worse than the first installment.

Critic Consensus: Moderately witty and acceptably acted, Diary of a Wimpy Kid 2 isn't much worse than the first installment.

In this sequel to 2010's surprise hit, Greg Heffley, the kid who made "wimpy" cool is back in an all-new family comedy based on the best-selling follow-up novel by Jeff Kinney. (Kinney's Wimpy Kid series has thus far sold 42 million books.) As he begins seventh grade, Greg and his older brother - and chief tormentor - Rodrick must deal with their parents' misguided attempts to have them bond. -- (C) Fox

Critic Reviews for Diary of a Wimpy Kid 2: Rodrick Rules

It's an episodic film, rather less interesting than its British director David Bowers's earlier work as an animator in Britain and America.

For a family entertainment this isn't at all bad.

There are momentary shafts of something like wit within this slightly bland mix...

Funnier and faster than its charming predecessor.

A release aimed at the half-term crowd, but accompanying adults will find plenty to enjoy, too.

Most of the kids continue to irritate and, for a comedy aimed at youngsters, the laughs are woefully scarce.

The Diary of a Wimpy Kid saga continues with this predictably mediocre installment...

Even though this new movie is under another director, it feels very much like the first film. The characters are great, being both relateable and extreme.

The pre-teen cast seems rudderless, without an interested hand guiding them into worthwhile comedic performances.

I'm not asking for Citizen Kane here, but just a wisp of expansion to the characters, an actual narrative that the film can walk down, or just some sort of ambition to the whole project would not have gone amiss.

Maintains the good-natured, playful and zany spirit that made that first movie one of the better non-fantasy-related kid films out there.

Audience Reviews for Diary of a Wimpy Kid 2: Rodrick Rules

A nice sequel that is quite funny and amusing almost in the same level of the adorable first movie, with its own share of good moments even though it did not make me laugh as hard as that one.

It lacks some of the wittiness and style of the first feature, but 'Rodrick Rules' is a more adult affair, more sophisticated, more substance, and just as entertaining. Focusing this time on the relationship between main kid Greg Heffley, played wonderfully like the first, by Zachary Gordon, and his older brother Rodrick, played exceptionally by Devon Bostick, the two brothers begin to bond despite their differences. And straight out of the starting gate the film takes the path of a more adult, and a certainly more impressive motion picture. For adults and older kids. However, for younger children, the main focus of the audience, it dawdles and loses much of the slapstick and gag centred comedy of the first. The cast however do not let down, with excellent performances from Zachary Gordon and especially Devon Bostick, who really shines throughout the ninety minutes. Steve Zahn and Rachael Harris, as the parents again, make short but as usual great addition to the film. The story is interesting enough, with many different parts and sketches throughout. But it still keeps a certain more linear style of sophistication with its choice of storytelling and narrative this time round. But that sophistication does bear the risk of alienating its original half term style audience. It probably does, in certain sections, but overall, maintains a good balance between the more classier comedy and the slapstick and gags of the first, creating a fun, and definitely all round piece of family film.

Not as funny as the first movie, but just as entertaining. These movies are fantastic and remind me a lot of older family comedies. I have 2 little brothers and I treated my middle one, Justin, just like Rodick treats Greg. Brings back fond memories of torture. Each character in the movie is very entertaining and will remind you of someone you knew when you were younger. How can you not like Rowley? Or not known someone just like him? This movie builds off the first one and helps to really move the series along for, future movies. If you haven't checked out either "Wimpy Kid" movies, you should do yourself a favor and watch them.

So so so much better than the first one. I for some reason am one of the few who didnt get the first movie. But the second time around I really enjoyed the back and forth of the brothers, the bumbling parents and even rowley!