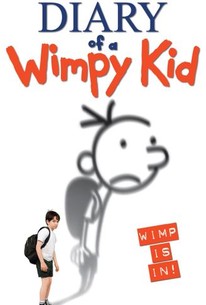 Critics Consensus: Unlike its bestselling source material, Diary of a Wimpy Kid fails to place a likable protagonist at the center of its middle-school humor -- and its underlying message is drowned out as a result.

Critics Consensus: Unlike its bestselling source material, Diary of a Wimpy Kid fails to place a likable protagonist at the center of its middle-school humor -- and its underlying message is drowned out as a result.

Critic Consensus: Unlike its bestselling source material, Diary of a Wimpy Kid fails to place a likable protagonist at the center of its middle-school humor -- and its underlying message is drowned out as a result.

Diary of a Wimpy Kid Photos

Meet the kid who made "wimpy" cool in a family comedy based on the best-selling illustrated novel Diary of a Wimpy Kid by Jeff Kinney, the first in a series that has thus far sold 24 million copies. "Diary of a Wimpy Kid" chronicles the adventures of wise-cracking pre-teen Greg Heffley, who must somehow survive the scariest time of anyone's life: middle school.

News & Interviews for Diary of a Wimpy Kid

View All Diary of a Wimpy Kid News

Critic Reviews for Diary of a Wimpy Kid

Conveys, in a good-humoured, sharply observed way, the small, painful cruelties and unpredictable rules of early adolescence, and it celebrates awkwardness without feeling the need to convert it into cheap triumph.

The film retains much of the original humour, some of it well executed. It's reasonably faithful to the spirit of the books, probably because Kinney is the executive producer, but it's by no means equal to his originals.

[A] sappy and superficial adaptation...

One for the kids, if they're really misbehaving.

It's an interesting idea, deserving of a more interesting treatment, but this is just dopey and patronising.

The movie is funny, endearing, and true enough to the life-is-pain spirit of the books.

Diary of a Wimpy Kid is a wonderful family film that will generate meaningful discussions between parents and kids.

If you're a parent who's been forced to sit through a barren desert of painfully unfunny family comedies, Diary will feel like an oasis.

Zachary Gordon, as the wimpy kid of the title, seems to be aiming for a Ferris Buehler-esque omniscience and superiority and, while he doesn't quite pull it off all the way, I was down for his struggle.

Audience Reviews for Diary of a Wimpy Kid

Out of all teen films dealing with a new school, this is definitely the best to me. I haven't read the source material that his film was based on, but I'm sure it does a good job at following the series of books. This is a perfect film to show a kid who is now going into middle school, and the kids in this film all do great jobs at acting in this, and all of them are genuinely funny. The way how they use the cartoon drawings and animate them is very cool to watch and very interesting to look at. To me the best thing about this whole movie aside from the main actor and storytelling, is the music. The music for this film was picked perfectly, Beasty Boys Intergalactic for the Mother Son dance scene is very funny to watch, and very goofy to watch, but the best song in the movie is the ending credits song, "What Do You Want From Me" by Forever the Sickest Kids, its very energetic, well played by the group, and is very catchy to listen to.

This movie is so bright, amusing and sweet that it feels like only half an hour. It made me laugh real hard and I was surprised to see that it doesn't give in to easy stereotypes nor to cheap moral lessons, remaining mostly human, honest and pretty funny.

Adapted from the bestselling books, 'Diary Of A Wimpy Kid' hits all the right notes in something which utterly is for all of the family. Starring the excellent Zachary Gordon in his first major role as the central protagonist Greg Heffley, 'Wimpy Kid' tells the story of a wimpy dork, who through the use of his diary, which he repeatedly tells people is a journal, tells us of his first days in middle school in the US. Its witty and clever direction is impressive, especially when the crew are working with one of the three golden don'ts of cinema, children. All of the children act well, especially supporting best friend Robert Capron and older brother Devon Bostick. As well as wonderful, although short, performances from Rachael Harris and Steve Zahn, Thor Freudenthal brings together a nice set of characters. The script and story itself is just a collection of stories in his first year at the school, but they are linked together nicely through the story of his friendship with embarrassing but lovely best friend Rowley. For kids the film has plenty of gags, which parents will enjoy too. But the very nature of the film, and the fact that Greg Heffley is a child who believes he knows everything will appeal to parents and older kids, such a myself, as well. It's a mickey take, and the protagonist doesn't have to be liked or loved. Instead, as we walk with the character through his first year, we learn to love him. The theme of the whole story isn't produced in a grand spectacle, but isn't done terribly either. It's nothing special on that front, but the cross-audience appeal and wide selection of funny moments, topped off with the book's style animation makes 'Wimpy Kid' an appealing, but unlikely treat.

I didnt get this movie. My daughter loved it. I just well It just annoyed the hell out of me.

Diary of a Wimpy Kid Quotes