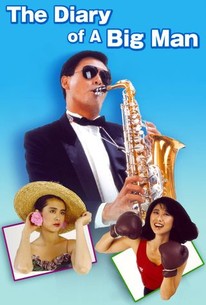 Diary of a Big Man Photos

Internationally renowned filmmaker Tsui Hark produced this amiable screwball romantic comedy from Hong Kong director Chor Yuen. Popular action star Chow Yun-fat plays Chow Ting-fat, a stockbroker who is in love with two different women. Joey (Joey Wang) is a beautiful boutique owner and Sally (Sally Yeh) is a glamorous stewardess. Chow wants to marry them both, and manages to do that very thing, but naturally must keep each woman unaware of the other's existence in his life. The usual farcical situations ensue, with Chow's friend Chi-hung (Waise Lee) aiding him in the constant subterfuge necessary to keep his activities a secret. One person who does notice when two different women claim to be Chow's wife is Inspector Cheng (Kent Cheng), who starts investigating Chow's situation with a grim dedication rarely seen outside of homicide units. As might be expected, Chow's luck eventually runs out after one too many near-misses, and Joey and Sally join forces to get revenge on the two-timing bigamist. It's a familiar plot, but the exuberant actors and Yuen's skilled direction make it constantly seem fresh and amusing. Carrie Ng leads an impressive supporting cast including David Wu and Shing Fui-on.

Critic Reviews for Diary of a Big Man

There are no critic reviews yet for Diary of a Big Man. Keep checking Rotten Tomatoes for updates!

Audience Reviews for Diary of a Big Man

An amusing film, carried by the considerable charms of Chow Yun-Fat, Sally Yeh and Joey Wang. A fun ride, proving that Hong Kong films can teach Hollywood a thing or two about romantic comedies as well as action films.

Diary of a Big Man Quotes