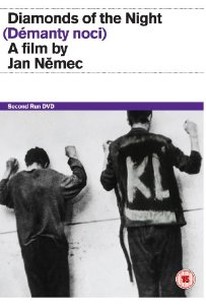 Diamonds of the Night is set in Czechoslovakia during World War II. Ladislav Jansky and Antonin Kumbera play two Jewish youths who escape from a concentration camp-bound train. Captured by local peasants on a charge of stealing bread, the boys are sentenced to a firing squad. It turns out that the villagers have no real stomach for killing, and the boys merely go through the motions of a mock execution. They are let go, and continue their journey to freedom. Diamonds of the Night was originally released as Demanty Noci. ~ Hal Erickson, Rovi

Critic Reviews for Diamonds of the Night (Démanty noci)

Nemec's debut stunner feels even more potent now that it's been freed of the expectations and delineations of a national movement.

One loses interest. It looks unreal.

Diamonds of the Night remains a crowing jewel in an important film movement that aches to be experienced.

A film of such raw power that it still feels genuinely radical, a hallucinatory, aesthetically visionary work.

This manages to combine the striking realism of a documentary with the surrealistic touches of an experimental piece.

It's not only possible for audiences to emerge from this movie without a clear idea of what happens in it, it's virtually required. We're left with existential terror.

A thrilling tale of survival, dehumanisation and coming-of-age in Nazi-occupied Europe.

The technique is the jaggedly familiar one of cuts to fantasy and memories; the result painful but pitiful, with something new to say about the inhumanity, not of official fiends, but of everyday old men out on a spree.

Not just specifically about the Second World War, Nemec's film still has resonance today as a broader allegory for the politics of power and the often belligerent attitude of the old towards the young.

Audience Reviews for Diamonds of the Night (Démanty noci)

There are no featured audience reviews yet. Click the link below to see what others say about Diamonds of the Night (Démanty noci)!