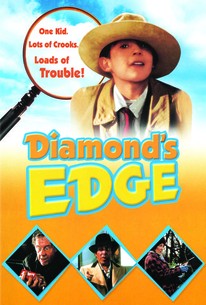 Nick Diamond (Colin Dale) is a private detective hired by a South American midget to guard a box containing a rare treasure. When Nick is jailed, his kid brother Tim (Dursley McLinden) is called on to take the case. Tim dodges bullets and escapes from being bound and gagged while battling hard-nosed cop Boyle (Jimmy Nail) and the shadowy thugs out to get the treasure. Susanna York plays the chanteuse Lauren Bacardi in this film-noir styled children's crime drama.

Michael Medwin
as The Professor

There are no critic reviews yet for Diamond's Edge. Keep checking Rotten Tomatoes for updates!

There are no featured reviews for Diamond's Edge at this time.