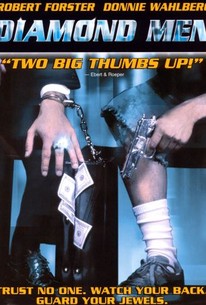 A veteran salesman is forced to make way for a young drummer and has some improbable adventures along the way in this comedy-drama. Eddie (Robert Forster) has worked for over 30 years as a travelling jewelry salesman, but after he's stricken with a heart attack, he discovers he's no longer eligible for insurance. Given the fact that he routinely travels with a stash of goods worth up to a million dollars, this development means that he's going to have to give up working on the road. Bobby (Donnie Wahlberg) is the young salesman who is first in line to take over Eddie's route. Though Eddie doesn't think much of reckless Bobby, he takes him on the road to show him the ropes. As they spend some time together, Eddie takes a liking to Bobby, who wants to show Eddie his gratitude for teaching him how to sell in the big leagues. Bobby takes him to a combination roadhouse and brothel for an evening's entertainment, but things get sticky when jewel thieves track the two men to the club. Diamond Men also features Bess Armstrong and Jasmine Guy as a pair of working girls Eddie and Bobby meet in the course of their adventures.

Paul B. Price
as Carl

Wahlberg looks like a rising star, while the seasoned Forster manifests his usual sober authority and approachable masculinity.

Sacrificing excellent characters to an ultimately lame payoff, Diamond Men's potential as a diamond in the rough turn out to be more 'rough' than 'diamond.'

Pacing and story problems aside, this is as fine a showcase for Forster, Armstrong and Wahlberg as they could want, a real actor's picture.

Cohen obviously knows the dealings and dangers of the diamond trade, but instead of creating an interesting study of that world, he prefers to venture into the obvious and ridiculous.

...a lost classic, a beautiful miniature evocation of a unconventional, minor-key way of life.

...an incredibly entertaining look at a pair of exceedingly compelling characters.

...a wonderful character study with an unforgettable acting performance by Robert Forster.

Robert Forster's subtle "nice guy" performance in "Diamond Men" is one of the main reasons to watch the film, if not the only reason. Donnie Wahlberg is likable in his supporting role and the script offers some fine twists, but there is nothing here that engages or involves viewer. Cohen's direction and script hold up for the most part, but neither is very solid.

A little uneven in tone and pace, but made largely enjoyable by a well written script and Robert Forster.

[font=Century Gothic]In "Diamond Men", Eddie Miller(Robert Forster) has been a traveling diamond salesman for the past thirty years in central Pennsylvania but because of a recent heart attack, he cannot be insured anymore. The only chance he has to keep his job is to train his successor, Bobby Walker(Donnie Wahlberg), a brash newcomer, whose only experience is maintaining vending machines.[/font] [font=Century Gothic][/font] [font=Century Gothic]"Diamond Men" is a modest slice-of-life movie that is as much about respecting the traditions of the past and small towns, as it is about not fearing what will come next. And it is helped enormously by a splendid performance by Robert Forster. But I don't know how I feel about the ending.[/font]