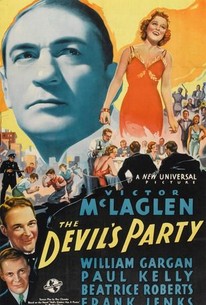 This melodrama chronicles the enduring friendship between four boys in New York's Hell's Kitchen. As boys, the made a pact that they would meet annually to renew their friendship. Trouble ensues when one of the boys accidently sets fire to a building. Another boy took the blame. He went to reform school. Years pass before he is reunited with his pals. Now the man is a professional gambler and nightclub owner. He sees two of his friends, who have become cops, when they come into his club to investigate a murder. As they look into the death, one of the cops is killed. The fourth friend, now a priest, makes sure that justice prevails.

Scotty Beckett
as Mike O'Mara as a child

Mickey Rentschler
as Marty Malone as a Child

Tommy Bupp
as Jerry Donovan as a Child

Juanita Quigley
as Helen McCoy as a child

Dick Jones
as Joe O'Mara as a Child

Critic Reviews for The Devil's Party

There are no critic reviews yet for The Devil's Party. Keep checking Rotten Tomatoes for updates!

Audience Reviews for The Devil's Party

This Movie is from the Mill Creek Dark Crimes 50 Movie Collection. A group of young kids growing up in Hell's Kitchen form a lifelong bond. Because one refused to rat the others out, he goes to the reformatory. As adults they find their way to conflicting positions in society. Two cops, a priest, and a nightclub owner. The latter is mixed up in some shady dealings, mostly related to gambling. He hires a couple guys to rough a "client" up but they don't heed his limitations and kill the guy. This sets of a series of events where he is now under suspicion and brings about the death of one of his lifelong buddies. The film looks pretty good and it has that cool black and white element. Of course, honor is at the center, but that honor is not respected by the "really" bad guys. Victor McLaglan's character must confront his own miscues and face the music for his actions. I was surprized how much I enjpyed this Movie made in 1938. 4 Stars 3-16-14