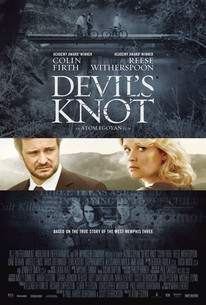 Atom Egoyan's haunting true mystery about who killed three children in a small town. The police identify three teens, aka the West Memphis Three, as committing the murders during a satanic ritual but the truth may be scarier as a mother (Reese Witherspoon) and investigator (Colin Firth) suspect all is not as it appears. (c) Official Facebook

Abigail Monet
as Girl on Stand #2

Carolyn Etheridge
as Girl at Weaver

Thomas Strickland
as Lawyer
View All

In literary adaptations such as Felicia's Journey and The Sweet Hereafter, Egoyan has shown that he can depict darkness and explore loss. But here, he feels mired in stereotypes, or dependent on images that documentaries have already created.

It is a strangely unsatisfactory affair that doesn't quite work either as a documentary-style reconstruction, a brooding thriller or a courtroom drama.

Why has Egoyan made this unsatisfactory, ultimately dismaying film, when this awful story has been so thoroughly treated already elsewhere?

[Takes] the perfunctory shape of an afternoon TV movie.

The whole thing is ill-scripted, ill-directed and, worst of all, superfluous.

A disappointment that is only partially saved by its actors. [Full Review in Spanish]

It never quite finds a reason to exist, and that's a genuine shame, as a case as multi-dimensional as the one it used as source material should have more than enough inspiration.

Today we find a director more concerned with recovering his idiosyncrasy than with deepening our fears. [Full review in Spanish]

The passion of the two leads is not enough to carry the film to any satisfying conclusion.

Andy J Smith
One Room With A View

Despite solid performances from the bulk of the cast, overall, the characterization is so shallow there is little that allows us to empathize with the protagonists.

The courtroom drama is powerful enough to make us wish that they'd given less time to Ms. Hobbs and more time to showing us the rest of what's known to have occurred.

No more insight than what's generally known of this high profile case. The execution fails in creating the thrilling atmosphere. Not a great piece for those who are new to the tragic event either. 0.25/5 for it didn't bore to death as feared.

The case of the West Memphis Three has stirred up so many emotions and debate on the ordeal. Four documentaries have been produced on the subject, and the three boys who were wrongly convicted of the crime finally got released in 2011. A dramatic film on the murders would of course surface, and the result is Devil's Knot. This is a decent drama, one that departs from the facts slightly and according to Damian Echols is a film that takes creative liberties with what actually happened. I thought it was a film that could have been better and considering that it's based on a true story, it definitely could have been a film that should have stood out. However, Devil's Knot tries too hard at rushing through the story, and though it's a decent affair, it falls short of what this film could have been. The performances here are good, and save the film from being a total dud, but if you really want to get the truthful look of what happened, give the Paradise Lost trilogy of documentaries a viewing as well as the film West of Memphis. This film, recounts the events well enough, but like I said it does take creative liberties, which the filmmakers shouldn't have done. If Devil's Knot would have been an accurate portrayal of the WM3 and the murders, then maybe this film would have truly been a good drama. Devil's Knot as it is, is a decent film with a few good performances, especially that of Reese Witherspoon. However like I said, watch the four documentaries on the WM3 instead, they're far superior and disturbing in the way they handle the subject of this wrongful conviction better than any drama could ever do. Devil's Knot is purely an entertaining drama, and it never succeeds at being a memorable film, and in the end it leaves a lot to be desired.