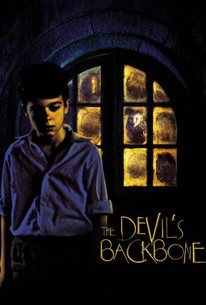 Critics Consensus: Creepily atmospheric and haunting, The Devil's Backbone is both a potent ghost story and an intelligent political allegory.

Critics Consensus: Creepily atmospheric and haunting, The Devil's Backbone is both a potent ghost story and an intelligent political allegory.

Critic Consensus: Creepily atmospheric and haunting, The Devil's Backbone is both a potent ghost story and an intelligent political allegory.

The mournful fable of the Santa Lucia School during the last days of the Spanish Civil War. An imposing stone building set on a desolate plateau, the school shelters the orphans of the Republican militia and politicians, and other abandoned children. Upon his arrival at Santa Lucia, 10-year-old Carlos is confronted with the hostility of Jaime, the oldest of the children. Besides aged professor Casares, the adult personnel of the school includes Carmen, the steely headmistress; Alma, another teacher; Conchita, the cook; and the young caretaker Jacinto. Aggressive and greedy, Jacinto is filled with hatred for the school that houses him and the teachers that raised him. Gradually, Carlos uncovers the dark ties that bind the inhabitants of the school, including the secret that haunts them--Santi, a student who was brutally murdered, and whose pale ghost now wanders the grounds. Who killed Santi on the night when a bomb fell in the center of the courtyard, miraculously without exploding?

Junio Valverde
as Santi
View All

Guillermo Del Toro's The Devil's Backbone is a really cool ghost story with an extraordinary human and political dimension.

It's a horror flick, and a creepily good one, that also functions as an allegory of the war that still haunts Spain seven decades later.

The Devil's Backbone augments its abundant creepiness with an equally powerful poignancy.

Though it fails in its final reels to capitalize on its early promise, pic is still stylish, accomplished and tremendously enjoyable fare.

An entertaining and atmospheric revenge tale.

The Devil's Backbone truly is a masterful film, one rife with both symbolism and story. This is a poetic piece of cinema that manages to expose the horrors of war through the lens of fantasy.

A microcosm, that is like a small war, combining living and dead, resentments, betrayals and revenge in an exceptional way with an impeccable cast. [Full review in Spanish]

Although spooky, The Devil's Backbone becomes weighed down by perhaps one too many subplots.

What Del Toro provides with The Devil's Backbone is the recognition that evil exists within the most routine of circumstances. That knowledge is as old as humanity's belief in the fantastic, and just as powerful.

You may find that images from this movie clamber back into your memory weeks after you see it, and give your spine a chill.

Though the whodunnit takes a fairly predictable course, the Spanish Civil War background adds powerful narrative and symbolic weight, while the striking imagery is simply poetic.

The Devil's Backbone is more sad than frightening. It focuses on the children in an orphanage with nowhere to turn to as the Spanish Civil War soon empties on their doorstep. While the ghost of Santi is truly unnerving, the film reflects a common theme in Guillermo del Toro's films - that humans are the worst kind of monsters.

Guillermo del Toro's The Devil's Backbone is a stunning, atmospheric horror tale that keeps you on the edge of your seat from start to finish. Del Toro viewed this as one of his most personal efforts, and unlike his other films, this film really goes deep into the horror genre, and in turn delivers a tense, terrifying film going experience. del Toro's direction is terrific and the script is well thought out with plenty of twists and turns to make for an exhilarating and terrifying film going experience. For me, del Toro is a unique director in the horror medium, as he has made several genre pictures that really stood out. Cronos and Mimic are proof of that. Both different films, yet they brought a whole new level of creativity to the medium, which is refreshing to see as well. This is an effective ghost story that is sure to appeal to genre fans, and for viewers looking for engaging horror tale, The Devil's Backbone is one such film that delivers what you'd expect from a del Toro picture. In terms of storytelling, this is a richly detailed film that grabs your attention from the first frame onwards. For fans that enjoy a good old fashioned ghost story, this will surely appeal to you. Del Toro always has a unique vision for his films, and with this film we get a different type f film, but it still nonetheless possesses everything you'd expect from a del Toro picture. His films tend to have a great sense of storytelling aided by powerful visuals. With The Devil's Backbone we get a surprisingly well crafted horror film that will stick with you long after you've seen. The film is one of the best foreign supernatural horror films that I've and it showcases Guillermo del Toro's great talents as a filmmaker perfectly.

Guillermo del Toro's third time in the director's chair sees him making a supernatural spook story set during the Spanish Civil War. Though there are some chills and scares, it's more of a subtle horror, with the supernatural playing a part, but the human element being the main focus. In a lot of ways, this is just a dry run for Pan's Labyrinth, just not as polished or fully realized. Don't get me wrong: this is very well made, and it looks great and is enjoyable, but it really just felt like a stepping stone to me, and not really as special as many feel it is.