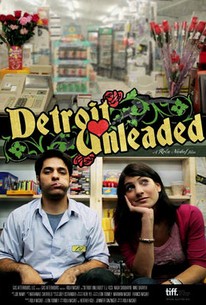 Between Detroit and Arab-America, Sami works behind the bulletproof glass of a 24-hour gas station with his cousin Mike. Inside this unique neighborhood, the station is more than just a pitstop for rolling papers and fake perfume, but a place where an infinite stream of spirited and often hilarious people flow through. When Najlah walks in, Sami's shift becomes anything but routine. ​Made and cast in Detroit, the film stars first-time feature actors EJ Assi and Nada Shouhayib, along with Actor/Comedian Mike Batayeh (Breaking Bad, You Don't Mess with the Zohan), Mary Assel, Steven Soro, and Lebanese film and television Star Akram El-Ahmar. ​Detroit Unleaded had it's World Premiere at the Toronto International Film Festival, where it won the Grolsch Film Works Discovery Award and received overwhelmingly positive reviews from audiences and film critics alike. (c) Official Site

Cast largely with local first-time actors, the film is strikingly authentic and has the ragtag charm of a community art project.

Big of heart but small of impact, the Arab-American rom-com "Detroit Unleaded" has all the kick of watered-down ethanol.

The filmmaker's cart is tugging frantically at a lazy horse.

"Detroit Unleaded" is about as gentle as comedies come these days, commendably so.

A quasi-fairy-tale ending suggests the director and cowriter was content with shrugging her shoulders when it came to tying things up, but the knee-jerky close can't spoil the film's vibrant cultural and environmental specificity.

The unique cultural setting of "Detroit Unleaded" is refreshing, even if some aspects of the story are old hat.

Laced with ironic, offbeat humor and bittersweet urban surrealism. And a rare glimpse in US movies, into the social, emotional and psychological impact of the workplace on the human condition.

Sweet, but not too sweet, amusing, but not laugh-out-loud funny, and occasionally suspenseful, but not palpably.

Detroit Unleaded is described as a comedy, but there are very few moments that make you laugh.

Having picked such an intriguing environment to depict onscreen, it's more than a little disappointing that Nashef then settles for such a routine storyline, one that's flatly told and not all that funny to boot.

Nashef knows how to write good dialogue, and lavishes attention on everyone.

There are no featured audience reviews yet. Click the link below to see what others say about Detroit Unleaded!