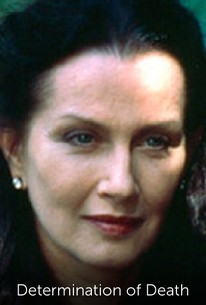 To escape his enormous gambling debts, the highly unlikable Reese Williams (Marc Singer) decides to fake his own death, with the help of his long-suffering wife, Katie (Michele Greene). Once Reese is safely "deceased," Katie will fall heir to a five-million-dollar insurance policy, which will help the couple square their debts and start a new life elsewhere. But can it be that the scheme has not gone the way it was supposed to -- and that Reese is dead for real? Reese's sister-in-law Ginny (Veronica Hamel) may or may not be able to provide the answers to insurance investigators Logan (William Katt) and Mac (George Dzundza), one of whom has fallen in love with Katie. Though innumerable clues are adroitly planted along the way, the outcome of the story remains a jaw-dropping surprise. Originally intended for theatrical release, Determination of Death was not seen until its premiere on German television in 2002; thereafter, the film was added to the "Monday Night Movie" rotation on the American Lifetime cable channel.

Rachel Hirsch
as Alice
View All

Critic Reviews for Determination of Death

There are no critic reviews yet for Determination of Death. Keep checking Rotten Tomatoes for updates!

Audience Reviews for Determination of Death