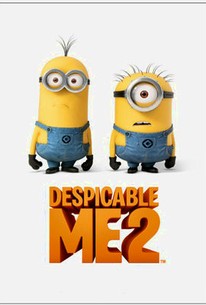 Critics Consensus: Despicable Me 2 offers plenty of eye-popping visual inventiveness and a number of big laughs.

Critics Consensus: Despicable Me 2 offers plenty of eye-popping visual inventiveness and a number of big laughs.

Critic Consensus: Despicable Me 2 offers plenty of eye-popping visual inventiveness and a number of big laughs.

Universal Pictures and Illumination Entertainment's worldwide blockbuster Despicable Me entertained audiences around the globe in 2010, grossing more than $540 million and becoming the 10th-biggest animated motion picture in U.S. history. In summer 2013, get ready for more Minion madness in Despicable Me 2. (c) Universal

News & Interviews for Despicable Me 2

View All Despicable Me 2 News

Critic Reviews for Despicable Me 2

This is one of those rarities, an animated sequel that improves on the original.

Co-directors Chris Renaud and Pierre Coffin, who do Minion voices expertly, never let up on the laughs. A fart joke in 3-D may not be three times as wacky, but the high spirits of Despicable Me 2 are irresistible fun.

How do you tell a story about a bad guy who is no longer a bad guy? Despicable Me 2 embraces the dilemma and adds new ones.

As a sequel [it] stands level with the first film (also directed by Pierre Coffin and Chris Renaud), and may have the edge on it.

"Despicable Me 2" lags on occasion, but every time I found my attention waning, the filmmakers did something wicked to goose me.

It has an incessant narrative rhythm and a fruitful direction, an animation that continues to explore the personal style of its predecessor. [Full Review in Spanish]

The best compliment you can give to Despicable Me 2 may also explain why it doesn't get a higher grade here: it's slight, mass-appealing fun.

The filmmakers know they have a good thing in the minions, and they figure more prominently in the plot and the film's humor, with sight gags and recurring jokes seamlessly woven into and enhancing the story.

A slick, inventive and thoroughly entertaining slice of animated nonsense that will enthral kids, amuse adults and rule at the box office.

It doesn't try to tug at your heart nor terrify you -- it's just happily silly entertainment that genuinely is for the whole family, from tykes to those actually shelling out the money for the tickets.

If you loved Despicable Me, you'll love this lovable sequel.

Audience Reviews for Despicable Me 2

Judging by the title this must be the follow up to the mildly original animated supervillain flick...by jove it is! Now that first film was cute and reasonably fresh, fresh in the sense that the main character Gru was quite a nice design and voiced nicely by Carell. Also the 'minions' were a neat little invention that did garner the bulk of the giggles and kept the film afloat. The down side was it was yet another superhero/supervillain/super spy parody/spoof type flick which has become a saturated genre. The big question for me was simply...did we really need this sequel? my answer to that is no. Yeah yeah I know I sound like a Scrooge but come on, really, this film has been so padded out its painful. The plot is so damn linear, supervillain up to no good, someone has to stop him, that someone is Gru. The first film had the neat little twist that the main character was a villain and becomes a goodie, switches sides. This time its just you're bog standard run of the mill superhero/super spy flick. The problem for me her was nothing really interesting happens, there is nothing to explain, no reason for anything at all. Gru is now a good guy, he's got out of the villain/hero/spy game and he's looking after those sickeningly cute kids which he adopted from the first film. That's it! there is nothing more, did we really need a new film to show us this? oh yeah Gru gets a call to help the 'Anti Villain League' to stop some other villain blah blah blah who cares. The point is none of this was needed, the first film was a reasonably decent quirky animated film that worked well on its own, there was no need to milk it Hollywood sheesh! What I wanna know is what are these minions exactly? what do they speak? where do they come from? and how many of them are there?! In this film there appears to be like...hundreds n hundreds of em! Yes its just a kids espionage cartoon and its not important as such but its just something I'm curious about. I mean sure the film looks great as do all animated films these days, but there is just nothing on offer here that warrants the sequel. One or two new characters amongst all the same visual gags, visual action, childish minion tomfoolery, gadgets and general super spy-like jiggery pokery. OK call me a misery but none of it felt worth it to me, it all fell totally flat, lifeless and stale. One thing I will mention is actually how scary it could be for kids. When those little yellow minions get turned into purple monster zombie minions the film does take a turn to the slightly eerie side. Especially the sequence where one of them is chasing the kids, Jesus its almost like a homage to 'Alien'! End of the day it doesn't really matter how eye blisteringly good the CGI is, if its all the same stuff trundled out all over again from the first film it will just feel like a cheap merchandise machine to me. The finale isn't too bad and ups the excitement somewhat but it still can't detract from a very anti climatic ending. The very final sequence with the kids right at the end is so disgustingly sickening I virtually gagged...good grief (mental note...its a kids film, its a kids film). Anyway no originality whatsoever anywhere, but bottom line if you liked the first then you'll like this I guess. I thought the first was reasonable but nothing overly special, so for me this has gone downhill. Am I being too hard on a kids film? well maybe but the film is so revoltingly sweet n sugary at times with zero originality I just can't sit back and not say it out loud.

Slight step down from the original, Despicable Me 2 is nonetheless a fun, entertaining follow up to the original that works well because there are enough comedic moments to make this a worthwhile sequel. The film isn't perfect, but that's the case with sequels. I enjoyed this film despite its shortcomings and the voice cast are great here as well. The film's story is quite good as well, and they toned down the elements a bit, which in a way is why the film doesn't match the first. Nonetheless for a follow-up this succeeds where many sequels fail. For fans of the first movie, there are enough aspects to enjoy here, and it does have the vibe that made the first so good, but at times it does a few things to be desired. However, the main thing that made this film very enjoyable were the minions, they were a big part of the film's appeal, and they really were funny and made me enjoy the film that much more. The material presented here works well, and it's a far better sequel than most that I have seen. With a well crafted screenplay, great voice cast, wonderful animation, Despicable Me 2 is a worthwhile and highly enjoyable picture that will certainly appeal to any age group as well as fans of the original. This is a memorable animated feature, even if it's a slight step down, it's far better than many sequels that fail to capture the essence of what made the original so much fun. This film has that, and we see the result on-screen. With plenty of laughs, a good story and wonderful animation, this sequel is very good, and well worth your time if you enjoyed the first film.

It's just a really fun movie. Gru is a great hero, his girls are adorable and the Minions completely steal the show. You may not care much for the story but it's really all about the characters.